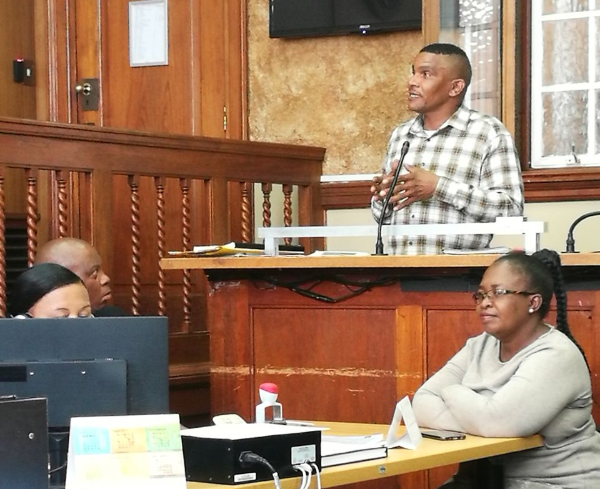 The lawyer representing alleged Johannesburg building hijacking kingpin Jonathan Constable has argued that the state's case against him and his co-accused is weak and fraught with inconsistencies.

"The state has no prima facie case against the accused. It is full of inconsistencies and flaws‚" argued defence counsel Dumisani Mabunda during Constable and his co-accused Bongani Khathide's bail application in the Johannesburg Magistrate's Court on Thursday.

Constable‚ Khathide and another co-accused‚ Kingsley Okwebe‚ are facing charges of fraud and theft relating to the hijacking of buildings in the city centre.

Okwebe has not applied for bail but has indicated to the court that he will be making representations. Mabunda said no property was registered in the name of any of the accused.

"There is no single witness who said the accused have taken rental monies from them for any of the properties they are alleged to have hijacked."

Mabunda argued that no statements had been made to police by anyone claiming that the men were administering the two properties situated in Rosettenville.

The state was also not in possession of a statement alleging that the men had misled or misrepresented tenants‚ Mabunda argued.

"The accused are good candidates for bail and should be released‚" Mabunda contended.

Prosecutor Cobus Ehlers‚ however‚ argued that Constable was a disturbance to public order and a danger to society.

He told the court that the state did not have a valid residential address for Constable as the state had been informed by the body corporate that he no longer occupied the property at the address he had given the investigation officer.

Ehlers also asked the court to take into account that the National Immigrants Council of South Africa (NICSA)‚ a union Constable claimed to be operating under to investigate corruption and hijacking of buildings‚ was not registered.

He also argued that the R500 that members of the union were paying a month was in fact rental money that was due to the owner of the two properties.

The state says the Johannesburg Magistrate's Court should refuse alleged building hijacking kingpin Jonathan Constable bail because he is an ...
News
3 years ago

The man accused of being the mastermind behind a series of hijacked buildings on Wednesday accused Johannesburg mayor Herman Mashaba of "abusing" the ...
News
3 years ago

The man described by the City of Johannesburg as the kingpin of building hijackings will be back in court on Wednesday.
News
3 years ago

Jonathan Constable is accused of being of one of the criminals who have ruined the inner city of Johannesburg. But he was all smiles as he appeared ...
News
3 years ago