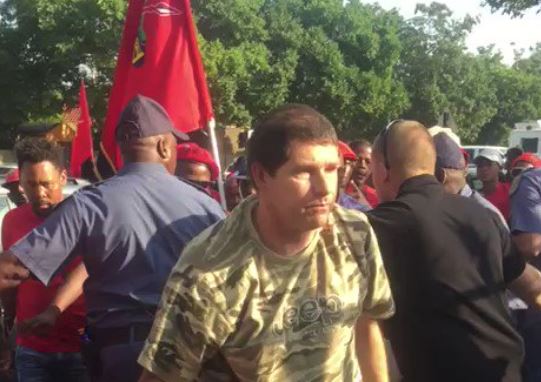 A parent was taken into the school grounds after apparently being punched by an EFF supporter in the face.
Image: TimesLIVE

Police had to separate parents and protesters at the Afrikaans school‚ which recently scored a legal victory in keeping out 55 Grade 8 English learners.

Racial tensions flared up after the ruling‚ with black parents shouting “away with racism”.

A parent recovers from a blow from a disgruntled EFF member who punched him in the face after he stopped a black parent from driving past Hoërskool Overvaal. The parent, earlier pulled a zap sign at the EFF protesters. Video and Pictures: Neo Goba pic.twitter.com/GkeJzUDlrK

A parent was taken into the school grounds after apparently being punched by an EFF supporter in the face. He had tried to stop a black parent from driving past Hoërskool Overvaal as she was hooting and had her fist in the air.

The parent had earlier made a rude gesture towards EFF protesters before accompanying his daughter into the school premises.

Protests turned violent on Wednesday 17 January 2018 at Hoërskool Overvaal in Vereeninging, which has been at the centre of a language row.