Give amnesty to all immigrants‚ African Diaspora Forum urges 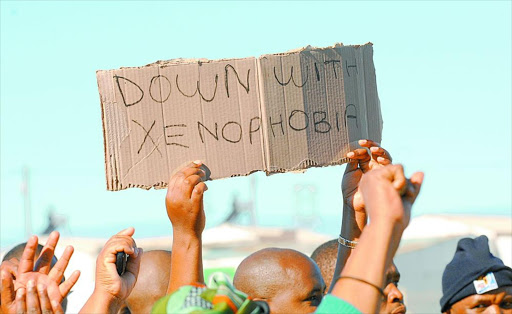 The African Diaspora Forum (ADF) is seeking general amnesty for all undocumented immigrants in South Africa.

"Many immigrants' kids cannot go to school because their parents are illegal in this country‚ making the children illegal as well. Although the South African constitution stipulates that every child has a right to education‚ some children of immigrants have continuously been denied these rights‚" Gbaffou said.

The forum said that it was in this vein that it was requesting the government to grant amnesty to those who were already living in the country.

"So that instead of continuing to live on the sidelines of the law‚ in which they continue to access social services through illegal means‚ they can be allowed to contribute to the development of this country‚" said Gbaffou.

The forum acknowledged the country's efforts to improve immigrants’ lives by granting both Zimbabwean and Lesotho nationals special permits but thought the gesture could be extended to immigrants from other Southern African Development Community countries.

"Why are we making it so difficult? Why don't we make sure that everyone has access to basic services and they are accounted for? People are forced to sleep with money under their mattress because they don't have documents. Banks don't do business with them. So you must sleep with your millions‚" Gbaffou said.

Among those who made presentations at the hearing was Kaajal Ramjathan-Keogh from the regional nongovernmental organisation‚ the Southern African Litigation Centre.

Ramjathan-Keogh said that the “scapegoating” of immigrants as the cause of limited resources such as jobs and education‚ and as being responsible for the rise in poverty‚ violence and crime‚ was one of the causes of ongoing stigmatisation and discrimination of immigrants.

"Between 2000 and March 2008‚ at least 67 people died in what were identified as xenophobic attacks in South Africa‚" she said.

In her presentation‚ Ramjathan-Keogh recommended that in order to combat hate crimes‚ the Department of Justice and Constitutional Development must develop hate crimes legislation and support measures to institute it.

67 arrested in raid by City of Joburg on hijacked properties

Sixty-seven undocumented immigrants were arrested on Wednesday after the City of Johannesburg conducted a crime prevention operation in three ...
News
4 years ago

The lawyer representing alleged Johannesburg building hijacking kingpin Jonathan Constable has argued that the state's case against him and his ...
News
4 years ago