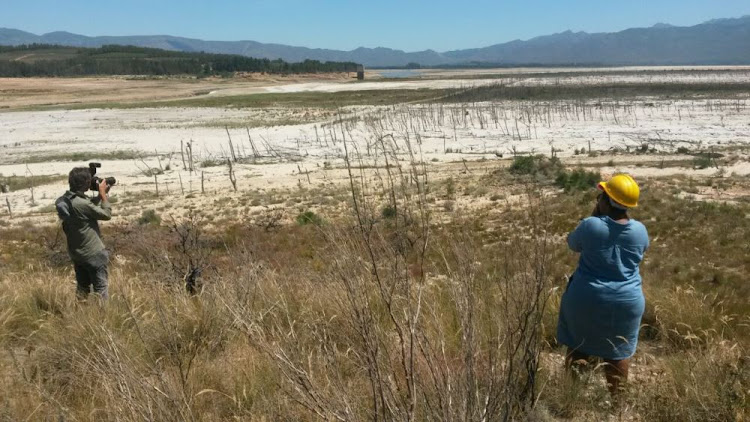 Theewaterskloof dam, near Villiersdorp, during a media visit on Thursday.
Image: Bobby Jordan

Western Cape water supply is now so low that engineers are building a dam within Cape Town’s main supply dam – to pump out the last puddles of water.

A temporary coffer dam inside Theewaterskloof dam‚ near Villiersdorp‚ has been designed to pool the last 10% of supply‚ which will then be pumped into the canal that feeds the city's water system.

It is one of several Department of Water and Sanitation drought interventions highlighted on Thursday during a media visit to Theewaterskloof‚ which is just 10.84% full.

Canals under construction will feed the coffer dam‚ from where it will be pumped at 1.5 cubic metres per second.

At that rate‚ the department will continue pumping the remaining water out of the dam for 260 days‚ according to infrastructure chief director Leonardo Manus.

The water is stranded behind a wide sandbank and cannot reach the tunnel used to channel it to the city.

Manus said Theewaterskloof was “designed to fail at 10%” – the lowest level at which water is still accessible. The current measures were therefore obligatory in order not to waste the remaining water.

“We have to change the operational philosophy of the Theewaterskloof dam to make the last 10% available‚” he said‚ adding that the coffer dam would allow the department to draw down to 4.6%.

If by then there was still no rain‚ a new pump station and dam would have to be constructed. Manus said the new coffer dam and canals would not disappear when the dam filled up‚ and could be used in future droughts.

The “dire” level of water at Theewaterskloof was partly due to its relatively small catchment area‚ which had experienced dramatically reduced rainfall. Four years ago the dam was overflowing. Now it might take years to recover to average levels.

R6-billion to be spent to tackle drought

Government has set aside R6-billion to tackle the drought situation in the Western Cape‚ the Eastern Cape and the Northern Cape.
Business Times
4 years ago

UCT urine project zips to the top of the pile