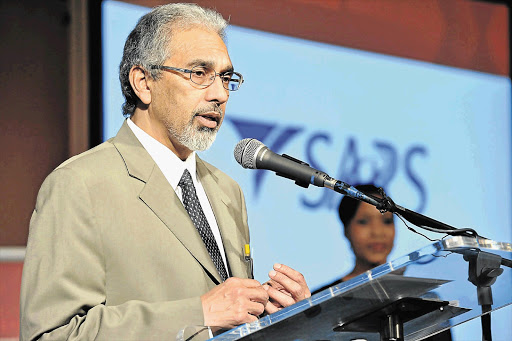 The Hawks are attempting to revive their discredited case against former tax officials Johan Van Loggerenberg and Ivan Pillay over the “SARS Rogue Unit”.

Pillay and Van Loggerenberg were each served with a summons on Friday to appear before the regional court in Pretoria on April 9 to answer to charges of allegedly contravening the Prevention of Combating of Corrupt Activities Act.

While the Hawks could not immediately be reached for comment‚ the charges could be related to an alleged payment of R100‚000 cash to “rogue unit whilstleblower” and fellow SARS employee Hendrick Lombard.

Lombard is one of two “whistleblowers” regarding an operation code-named Project Sunday Evenings‚ which they claim was to spy on the National Prosecuting Authority‚ which was at the time was prosecuting former police commissioner Jackie Selebi.

They will appear alongside Andries Janse Van Rensburg‚ also known as Skollie‚ the other “whistleblower” in the matter.

The South African Revenue Service (SARS) said on Friday it has appointed eight debt collection agencies to recover as much as possible of the ...
Business Times
3 years ago

TimesLIVE has learned that the appearance would be under the same case laid by embattled SARS commissioner Tom Moyane as part of a wider plan to discredit Pillay‚ one of the individuals touted as Moyane’s replacement.

The commissioner is under fire for a number of issues‚ including the disastrous handling of Jonas Makwakwa who was accused of taking bribes in return for ignoring their tax infractions.

Pillay and Van Loggerenberg are expected to also appear before the Ntsebeza Inquiry into the conduct of KPMG employees who compiled the so-called "SARS Report".

TimesLIVE reported on Thursday that the former SARS executives were refusing to give evidence before the inquiry if they were not provided with documents including the final KPMG report into its own employees and the contract between KPMG and SARS.

The Asset Forfeiture Unit (AFU) on Friday attached luxury vehicles and other movable goods belonging to nine people accused of defrauding the South ...
News
3 years ago

Without these documents‚ a source close to the inquiry explained‚ the former SARS executives feel the inquiry would not be able to unearth the true sequence of events.

The inquiry‚ which was convened by the South African Institute of Chartered Accountants‚ is headed by SC Dumisa Ntsebeza. It is seeking to find if any KPMG employees violated the SAICA code of conduct in the firms work on the SARS report‚ for the Gupta family among other matters.

Pillay resigned from SARS in 2015 in the midst of a lengthy disciplinary hearing emanating from the retracted KPMG investigation into the existence of a “rogue unit”.

A source close to the matter told TimesLIVE on Friday that the renewed action against Van Loggerenberg and Pillay was nothing more than an attempt to discredit them and prohibit their return to SARS. – Additional reporting: Kyle Cowan