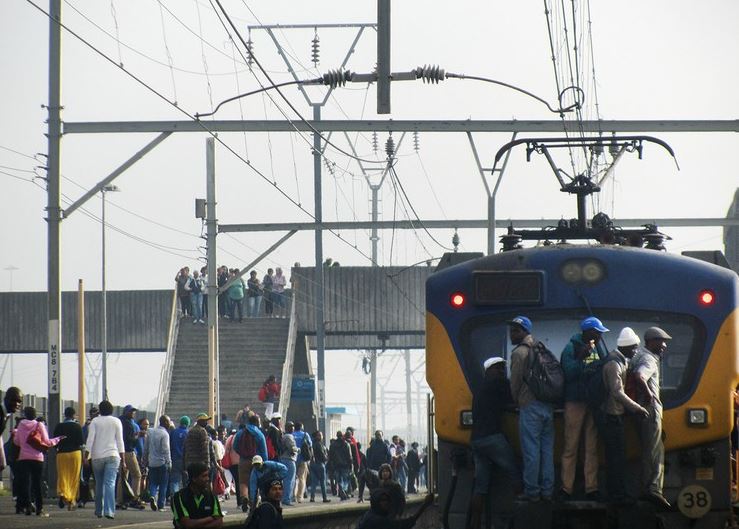 More than 10 employees were attacked and six trains withdrawn after they were damaged in the past week.
Image: Bernard Chiguvare

Metrorail could be forced to cancel trains on dangerous routes as it tries to protect both drivers and passengers from rampant crime.

Metrorail Gauteng on Wednesday suspended trains from Mamelodi in Pretoria after “a series of senseless staff assaults‚ train hijackings and attacks against its commuter trains on the Mamelodi Corridor”. A train was vandalised on Tuesday night at the Eerste Fabrieke Station.

She said more than 10 employees were attacked and six trains withdrawn after they were damaged in the past week.

A Metrorail train collided with a truck in Eerste River‚ Cape Town‚ on Wednesday causing 30-minute delays on the city's northern line.
News
3 years ago

The United National Transport Union (Untu) held a press conference in Centurion on Tuesday to address train hijackings and robberies. A train hijacking is when commuters force train drivers to continue on a route they often do not know.

Untu spokesperson Sonja Carstens said the Passenger Rail Agency of South Africa (Prasa) was sitting on a ticking time bomb‚ because trains were being robbed or hijacked every week.

“Our members don’t carry their phones with them anymore‚ because they are constantly being robbed of their valuables. Phones‚ purses‚ you name it.”

Carstens said trains were hijacked by criminals or by commuters who became frustrated when trains ran late.

“Commuters get furious and they simply point a gun at a train driver and force him‚ either by throwing stones or with a knife or a gun‚ to continue on a route.”

“They don’t know where there are signals or a turn or a steep curve on the route. When forced to drive like this‚ they can easily derail the train‚ which could result in fatalities.”

Harris said the Railway Safety Regulator (RSR) allowed Prasa to operate trains with manual authorisation if they drove below 30 km/h‚ which contributed to delays. A manual authorisation is when the two control officers in different stations are not speaking to each other and allow train drivers to continue en route.

Prasa spokesperson Nana Zenani said crime would “eventually leave Prasa with no choice but to cancel our services on dangerous corridors”. Offences include the theft of rail clippers that secure tracks to the ground as well as the theft and bombing of electrical transformers.

Untu believed the solution was what was currently being done on the Central Line between the Cape Town city centre and Khayelitsha‚ where guards accompany train crews and deploy armed officers at stations. Zenani said there were 88 armed guards on this route.

A massive security operation was unveiled on Friday for Cape Town’s collapsing and crime-ridden railway system.
News
3 years ago

“Prasa has also secured its electronic panels in locked cages to protect its infrastructure in the Western Cape‚ only to have it bombed and vandalised.”

“This combination of challenges leaves Prasa with no option but to rapidly replace stolen cables and restore the service rather than allowing for thorough investigations.”

RSR spokesperson Madelein Williams said‚ according to their records‚ the last train hijacking was in January 2012.

The driver of the train was threatened with a knife by two men who boarded the train at Duff’s Road Station in KwaZulu-Natal just before 9pm. They forced him to deviate from his planned route and drive to Phoenix Station.