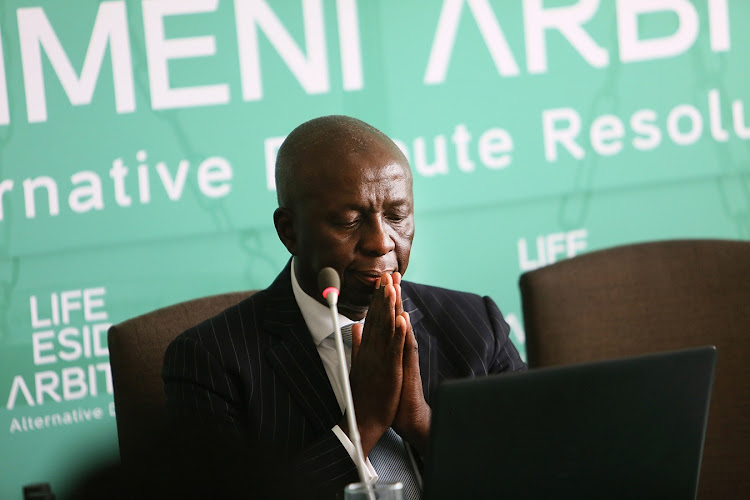 Retired Deputy Chief Justice Dikgang Moseneke is heading the arbitration hearings between the State and the families of victims in the Life Esidimeni tragedy.
Image: ALON SKUY/THE TIMES

Retired deputy chief justice Dikgang Moseneke made damning observations in his judgment on Monday about the sheer lack of official accountability for the Life Esidimeni tragedy.

Senior provincial heath officials had lied‚ played the victim‚ abused their power and knowingly violated the rights of mentally ill patients and their families because the instruction had come “from above”‚ he said in a summary of evidence presented to the arbitration hearings.

Here are five of his observations‚ in quotes‚ about key characters who shirked responsibility for the loss of at least 144 lives in Gauteng.

- “Dr (Makgabo) Manamela played the victim. Yes‚ she was the head of the directorate but she acted on instructions from above …. She knew that the removal was not in accordance with the law‚ but the order was from above‚ she said. When she was confronted in cross examination she said she knew that she was not obliged to carry out an unlawful instruction but carried it out nonetheless and it led to the death and torture of many helpless patients under her care …. Dr Manamela was integral to the decision to end (the) Life Esidimeni contract. She was not a victim and dutiful servant but a leader and a principal decision maker.”

- “He (Dr Barney Selebano) repeatedly said he was accountable as head of department. He says he was opposed to the Marathon Project …. He was afraid of Ms Mahlangu. He implemented the marathon project out of fear. Ms Mahlangu was his political principle and he had to follow her unlawful instructions. This is indeed an extraordinary tale - a medical doctor turned a government chief executive of provincial health pleads fear in decision making …. His claim that because he was perched at the top of the departmental activities‚ he knew nothing about the transfers‚ tortures and deaths of patients is plainly untrue.”

- “Ms (Qedani) Mahlangu too denied she was administratively responsible for the mass death and torture related to the Marathon Project …. She said she knew nothing …. In my view she took political responsibility for the horrid failing in the department she was in charge of. On all accounts she was at the helm of the Marathon project. She was the ultimate leader and commander of the project …. As the ultimate leader of the project and member of the executive council‚ she failed to explain why she allowed so many lives of defenceless mental healthcare users to be placed at risk for no good reason.”

- The Mental Health Review Board plays an independent oversight role and has the power to review decisions by the head of a heath establishment. “The chairperson and members of the review board knew about the en-mass discharge of mental health care users from Life Esidimeni facilities and did absolutely nothing about this. They raised not even a finger.” “In her evidence‚ the chairperson‚ Mrs (Dumi) Masondo‚ a multiple qualified nursing sister and a psychiatrist nurse of many years of standing and vast experience admitted that she and members of the review board were pleased to draw handsome monthly salaries from the department and yet they neither appraised themselves of their statutory tasks let alone perform them.”

- “The point here is less about what the families did but rather about what Ms (former provincial health MEC Qedani) Mahlangu‚ Dr (Barney) Selebano and Dr (Makgabo) Manamela refused to do. “They refused to stop the mass transfer of mental healthcare users to NGOs not fit for purpose. They chose‚ knowing all the facts and the risks‚ not to be responsive to the reasonable and lawful requests and demands of the claimants.”