More arrests in Mahikeng as police gear up for further violence 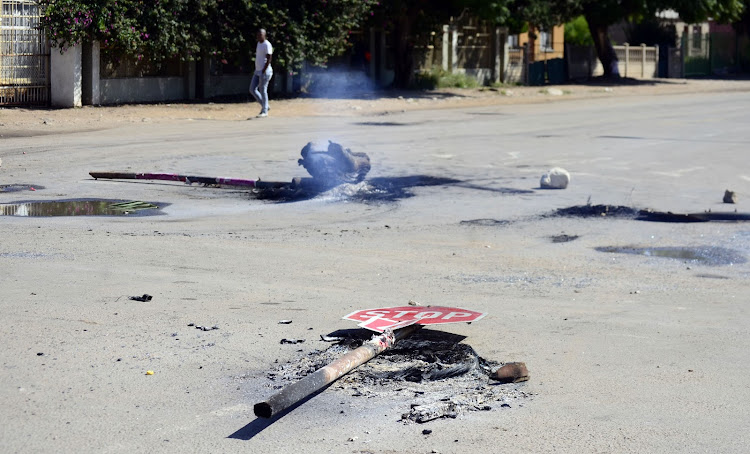 Seven more people have been arrested for public violence in Mahikeng‚ bringing the total to 16.

The police said in a statement the seven suspects were arrested in Danville and Lomanyaneng and are between 22 and 60-years-old.

They will appear in the Mmabatho Magistrate’s Court on Friday.

The first group of nine were arrested on Wednesday appeared in court on Thursday.

“They were all released on warning and will appear before the court again on May 29‚ 2018‚” SAPS said.

The police said they will remain deployed to ensure service delivery‚ including the cleaning of major roads‚ continues.

“Due to the protest and barricading of major roads‚ Onkgopotse Tiro Comprehensive School learners had to stay without eating the whole day as the truck that was carrying their meals was delayed‚ until it was escorted by the police.”

One man died‚ believed to be a protester‚ died in a car chase between police and protesters in Airport View on Thursday evening. Police spokeswoman Adele Myburgh confirmed the incident‚ but said police had nothing to do with the death.

“The protester died in a motor car accident in the quantum they were driving in.”

Myburgh added that police were trying to chase away protesters who barricaded the roads. Three other people were injured. It is unclear what hospital they were sent to as hospitals were shut down in the town.

Rubber bullets were also fired in the town's CBD on Thursday night.

Meanwhile‚ President Cyril Ramaphosa was cutting his trip to the United Kingdom short to calm fires in the North West capital.

The Presidency said a statement that Ramaphosa will address an “urgent meeting” with the ANC‚ the Leagues Alliance and the ANC caucus in the province on Friday at 12pm in Mahikeng.

Ramaphosa calls for calm in Mahikeng

President Cyril Ramaphosa has called for calm in the tense town of Mahikeng after two days of violent protests against embattled premier Supra ...
Politics
4 years ago

One man has died in Mahikeng‚ the North West capital which has been rocked by violent protests against premier Supra Mahumapelo.
News
4 years ago