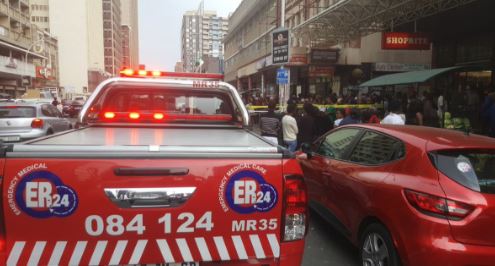 This is the second time in weeks where a newborn was disposed of in a bin in the city.
Image: ER24 via Twitter

Police are searching for a person who allegedly dumped a newborn baby girl in a dustbin in central Durban on Tuesday.

According to an ER24 statement‚ paramedics were summoned to a spot where the baby was discarded around 1.15pm.

“Upon arrival paramedics found the body of a newborn lying in a plastic on the sidewalk. It is understood that the body had been taken out of the dustbin by a member of the public.”

Paramedics declared the baby dead after examining her.

“The details surrounding this incident are not yet known but local authorities were on the scene for further investigations.”

This is the second time in weeks where a newborn was disposed of in a bin in the city. Earlier this month paramedics were dispatched near the Durban port after receiving a report of a dumped baby.

Rescue Care’s Garrith Jamieson said at the time that the baby girl was found wrapped in plastic in a dustbin located outside The Gables apartment block. The baby was also declared dead on the scene.