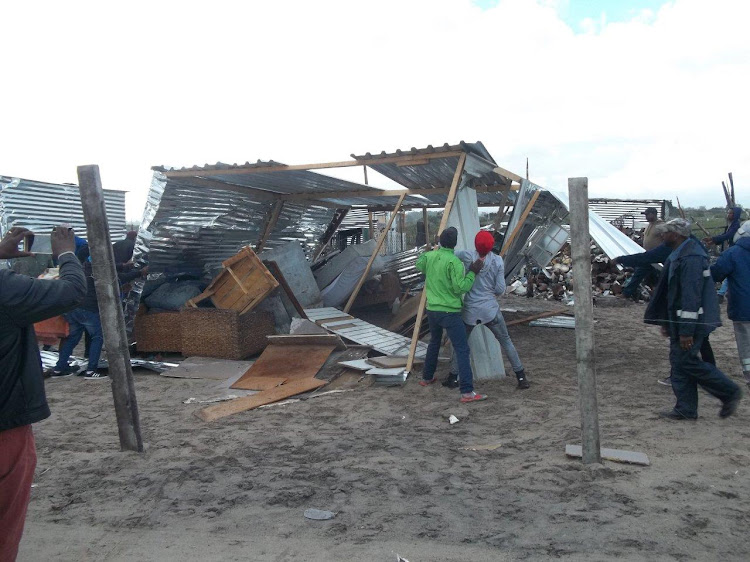 Residents of Siyahlala informal settlement tore down this shack because an immigrant was living in it with his South African wife on 9 June 2018
Image: GroundUp/Vincent Lali. File photo

Residents tore down a shack belonging to an immigrant from the Democratic Republic of Congo and his wife in Siyahlala informal settlement‚ Khayelitsha‚ on Saturday.

She told them to leave the couple’s belongings beside the place where their shack stood.

But after the community leaders left the scene‚ residents looted two beds‚ a table‚ blankets‚ plywoods‚ and corrugated iron sheets and left the spot where the shack stood empty.

Yasser Yala‚ 55‚ said: “People destroyed my shack and took everything. They say they don’t want a kwere kwere [derogatory word for a foreigner] to stay here‚” he said.

Yala said he still wanted to stay in Siyahlala.

“The committee [of community leaders] says I’m not safe because residents may burn my shack while I’m asleep‚ but I’m not scared to return and stay here‚” said Yala.

Currently‚ he said‚ he rents a house for R2‚500 a month in L section‚ Site B‚ Khayelitsha.

“I also want to have my own land where I won’t have to pay rent‚” said Yala‚ who works for Uber.

His wife Priscilla Kedama‚ 44‚ said: “The residents say I must not stay here because I’m trying to get a place for a kwere kwere. The shack belongs to me‚ and I want to stay with him because he is my husband.” Yala has a South African identity document.

She said she opened a case against the residents at Khayelitsha police station on Saturday evening.

“I want the police to help us get our building materials back‚” she said.

Before they destroyed the shack on Saturday‚ community leader Sakhamzi Ncusane told the residents at a community meeting that a foreigner and his girlfriend had built the shack even though they had told them not to.

“We told him that if he values his building material‚ he must not build a shack because residents don’t want foreigners to stay here‚” he said.

“The informal settlement is already full and people who are desperate for places to stay struggle to find vacant land. Foreigners will just want a place to kick-start business ventures‚” he told GroundUp.

The business dealings of informal traders – both local and foreign – will fall under the spotlight as the provincial government moves to allay fears ...
News
3 years ago

On Sunday‚ Yala and Kedama met the community leaders to ask them about the destroyed shack in Siyahlala.

Ncusane told them that he and other leaders would help them find another spot to put up their shack.

“We want the residents who stole his belongings to return them to him‚” he said.

On Monday Kedama said the community leaders and the residents searched for her belongings in Siyahlala and found a mattress‚ corrugated iron zinc sheets‚ sofas‚ ceiling boards and wooden planks.

“The leaders who incited the residents to destroy our shack and other residents helped us find our belongings and building materials‚ but we didn’t find all of them‚” she said.

- This article was published by GroundUp