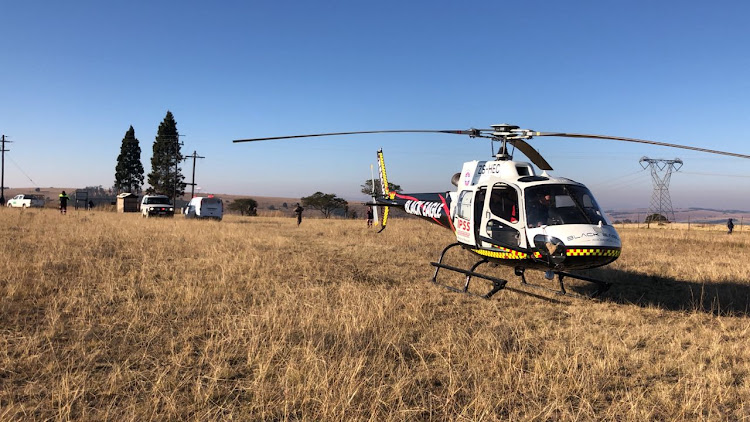 An anti-poaching security guard had to be airlifted from a KZN game farm on June 14, 2018 after being charged by a buffalo while on patrol.
Image: IPSS MEDICAL RESCUE

An anti-poaching guard tasked with protecting rhino at a private KwaZulu-Natal game farm was seriously injured when a buffalo charged him on Thursday.

It is understood that the man had been walking in the bush on patrol when he happened upon the buffalo‚ which charged him.

Buffalo are known to be notoriously ill-tempered. IPSS Medical Rescue spokesman Paul Herbst said that the man had been injured while trying to flee the animal.

“He sustained traumatic injuries to his leg and was in a serious condition‚” he said.

The guard was airlifted from the game farm‚ on the outskirts of Mooi River‚ by the Black Eagle Aeromedical helicopter.

He was flown to the eThekwini Heart Hospital where he remains in a serious condition.

A prominent 54-year-old businessman and his 21-year-old wife will appear in an Mpumalanga court on Thursday for the alleged possession of an illegal ...
News
4 years ago

WATCH | Buffalo tosses lion into the air to 'save' a lizard

Have you ever seen a lion being tossed into the air by a buffalo, flip three times then land on its feet?
News
4 years ago