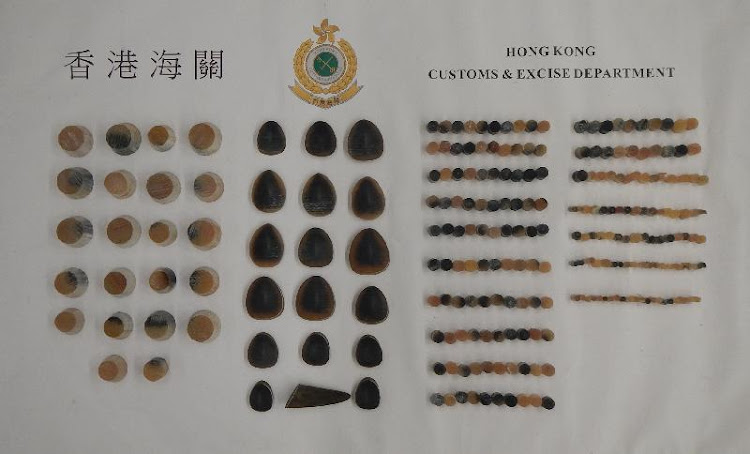 Hong Kong Customs have seized about 3.1kg of suspected cut rhino horn pieces with an estimated market value of about HK$620,000 (about R1-million) from a man who allegedly carried them through airport security checks at Beira and Johannesburg.
Image: Hong Kong Customs

Customs officers in Hong Kong have arrested a man carrying about R1-million worth of sliced rhino horn that appears to have been smuggled past three airport security checks in Johannesburg‚ Beira and Doha.

Hong Kong customs said on Monday that the 21-year-old man was intercepted on Sunday evening during a customs clearance check at Hong Kong international airport.

The man‚ whose name and nationality were not disclosed‚ arrived in Hong Kong following flights from Beira‚ Mozambique via Johannesburg and Doha‚ Qatar.

During customs clearance‚ a batch of suspected rhino horn pieces with an estimated market value of HK$620,000 (about R1-million) was found inside a black plastic bag in his check-in suitcase.

Weighing about 3.1kg‚ they consisted of about 40 horn slices and dozens of smaller bead slices‚ about the diameter of a cigarette.

The wildlife trade monitoring network Traffic said in a previous report that criminal networks of Chinese origin were chopping up rhino horns in backyard processing facilities in Africa into beads‚ bangles and bracelets to evade detection during transit. In most cases‚ rhino horn was smuggled by air.

“The smugglers’ efforts are sometimes crude; wrapping horns in aluminium foil‚ smearing them with toothpaste and shampoo to hide the smell of decay‚ or coating them in wax‚” Traffic officials said.

“Over time‚ more sophisticated methods have emerged; horns disguised as curios and toys‚ hidden in bags of cashew nuts‚ wine boxes and consignments of wood‚ or concealed in imitation electronic and machine parts. Circuitous transit routes‚ luggage drops and exchanges are also used to confuse the trail.”

It was not clear whether the check-in baggage seized in Hong Kong at the weekend may have been switched at any point during transit.

The case was handed over to the Agriculture‚ Fisheries and Conservation Department.

Officials said that under the Protection of Endangered Species of Animals and Plants Ordinance‚ offenders found guilty of importing endangered species products without a licence were liable to a maximum fine of HK$10-million (R17-million) and imprisonment of 10 years.

A prominent 54-year-old businessman and his 21-year-old wife will appear in an Mpumalanga court on Thursday for the alleged possession of an illegal ...
News
3 years ago

By 2016‚ police believed there were two groups behind a spate of rhino killings in the Eastern Cape‚ says former provincial head of detectives ...
News
3 years ago

A four-week-old baby rhino tried his best to save his mother‚ taking blows from a machete as he valiantly fronted up against marauding poachers.
News
3 years ago