One killed and 3 injured in early morning Boksburg heist 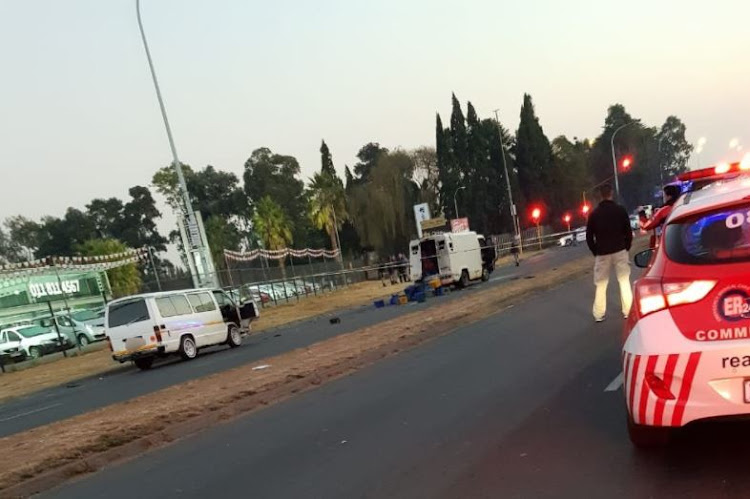 One person was killed and three injured after a cash heist on North Rand and Atlas Roads in Boksburg on July 5 2018.
Image: Twitter/@ER24EMS

Robbers involved in the daring cash-in-transit heist in Boksburg on Thursday morning failed to get away with any cash and lost one of their gang.

One of the robbers was killed in a shootout with security guards from G4S at the intersection of North Rand and Atlas Roads at about 6am.

The others fled the scene empty-handed.

Police Brigadier Vish Naidoo confirmed that no cash had been taken‚ adding that the robbers fled in a bakkie and two sedans.

An AK47 was recovered on the scene.

“Three of our members were injured‚” said Motor Transport Workers Union (MTWU) spokesperson Hlasinyane Motaung at the scene. “One has been shot in the leg‚ the driver was shot in the arm‚ and the crew man was also injured.”

ER24 paramedics said a female passenger in a taxi sustained a gunshot wound during the attack. She was found in a serious condition‚ said emergency workers.

Thursday morning’s heist was close to the scene of an attack in May‚ during which two cash vans were bombed. The act was captured on video and stunned the nation‚ with the robbers exchanging gunfire with guards in broad daylight.

“It is the same type of attack‚ but they failed to detonate the bombs this time‚” said Motaung.

Cash-in-transit heists are surging in South Africa‚ with 370 attacks in 2017 and approximately 140 reported in first five months of this year.

Motaung was aware of four other cash-in-transit heists that have taken place this week alone.

He praised police efforts to help combat the heists. “At the moment‚ even though the police have not been able to crack it [prevent the heists]‚ their response is commendable. It is not like before.

“I do think that now these criminals know that they cannot get away so easily‚ like they were doing before. The response that we are having [from SAPS] is satisfactory‚” said Motaung.

In Gauteng‚ community safety MEC Sizakele Nkosi-Malobane together with provincial commissioner Lieutenant-General Deliwe de Lange have held several meetings with the police to bust the gangs behind the attacks.

De Lange told the Gauteng portfolio committee on community safety last month that cash-in-transit heists were coordinated by a group of gangs with enough cash to pay for lawyers every time one of them is arrested and taken to court.

Meanwhile‚ guarding company SBV has offered a R100‚000 reward to anyone with information that could lead to the arrest and conviction of robbers who hit a cash van in Ramotse‚ Hammanskraal‚ as well as in Dalton near Pietermaritzburg in KwaZulu-Natal.

On Tuesday evening‚ three trucks were hit in two attempted cash-in-transit heists - on the N2 close to Mthatha in the Eastern Cape and on the N8 between Bloemfontein and Botshabelo in the Free State.

* An earlier unconfirmed report of a spate of suspected cash-in-transit heists in Johannesburg on Thursday morning has been confirmed as unfounded. TimesLIVE apologises for the incorrect information in the breaking article.

SBV Services has offered two R100‚000 rewards for anyone who has information that leads to the arrest of cash-in-transit robbers who struck in two ...
News
3 years ago