Children ‘too scared to play outside’ in Ocean View 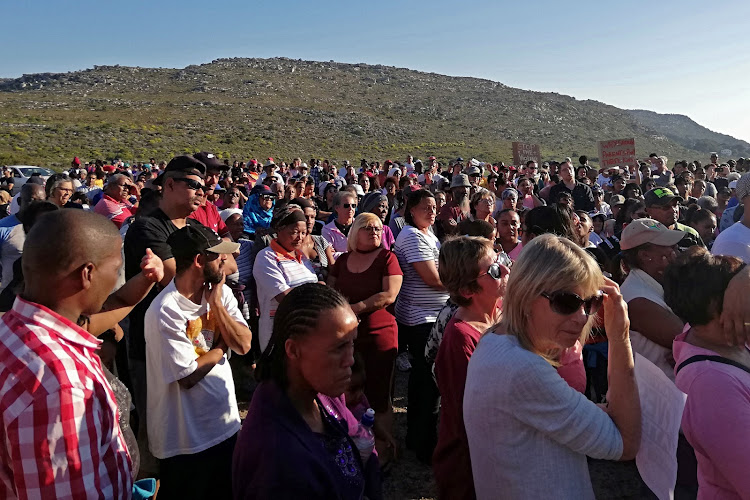 Nearly 400 Ocean View residents handed over a petition to the police calling for better policing in the area on July 8 2018
Image: Thembela Ntongana

The regular echoes of gunshots in the Ocean View community has left residents scared to leave their homes and children “too scared to play outside‚” says Mastoera Williams‚ a community leader in the area.

On Sunday‚ about 400 residents marched to the Ocean View police station‚ some holding placards which read: “Parents should not bury their children.”

The group handed over a petition to the station commander‚ demanding that the area be made safer. They want CCTV cameras to be installed by August‚ for an investigating officer to be on duty around the clock‚ regular roadblocks as well as stop and search operations. Residents have also asked for street lights to be fixed and police vacancies to be filled.

Reading the memorandum‚ Williams said‚ “The community of Ocean View is infested with gangs‚ drugs‚ robbery‚ mugging and killings. This has been allowed to continue for far too long and it appears that nothing is being done to bring stability‚ safety and security to Ocean View. Government is failing us.” She said people are being killed on a weekly basis in the community.

It was the third time residents have taken to the streets to demand more police visibility. On 22 September‚ residents clashed with police during a protest‚ which started peacefully‚ to demand that police take action to reduce the high level of crime in the township.

Cigarette smuggling is exploding in SA as sophisticated transnational organised crime syndicates step up operations‚ flooding the market with ...
News
3 years ago

Next to the police station is an open field where the memorial cross of two people‚ who had been shot dead‚ can be seen. The field is near to a block of flats and a park where children play.

Resident Steven Fritz told GroundUp that six people were gunned down in the last two weeks. “The community is fed up. We have tried to engage with SAPS and the answer we get is that the problem lies with national government who do not want to deploy more police in Ocean View.” Fritz said over the last four years there has been an increase in gangsterism‚ drug use and robberies in the community.

Another resident Vasco Vigils said the City of Cape Town and the police are not doing enough. “They shoot morning and night. The saddest thing is that the latest [shooting incident] happened at 9am last week next to a multi-purpose centre where children do activities.”

Vigils said nearly 90% of gunshot victims were not gang members but instead were cases of mistaken identity or bystanders. “We all know that the [young gang members] do not go for shooting training and so innocent bystanders become victims.”

Station commander Lieutenant Colonel Monwabisi Buzwayo signed and accepted the resident’s memorandum. He has worked in Ocean View since November 2017. On Thursday‚ representatives from the police‚ City of Cape Town and other organisations are expected to meet to discuss some of the issues raised by residents.

Buzwayo said‚ “The senior management is aware and is taking this Ocean View matter very seriously. To some people it might seem as if we are not serious enough. My phone rings even at 1am and I know something bad has happened.”

Buzwayo said one of the biggest challenges was not getting support and cooperation from the community. “Last week we searched most of the houses because we heard that [criminals] are hiding there‚ but we didn’t find anyone because people are hiding them.”

-This article was published by GroundUp