One dead in apparent hit in Randburg 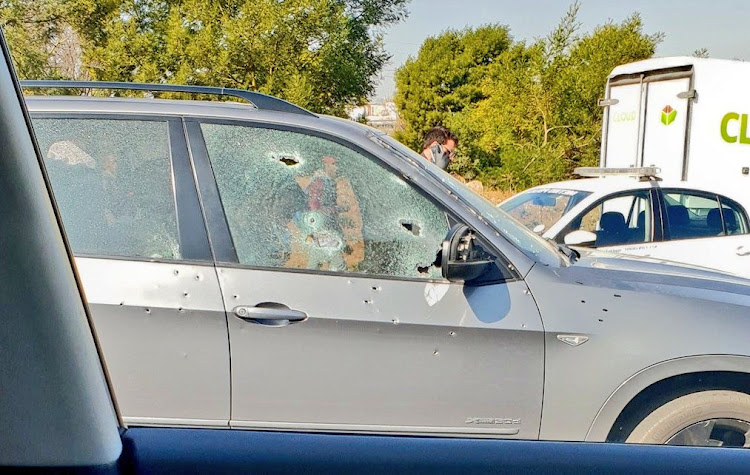 An image of a BMW X5 riddled with bullet holes it was appears to have been an organised hit at Malibongwe and Pres Fouche on 17 July 2018
Image: Via Twitter/@PigSpotter

One person has been shot and killed in what appeared to be a hit on Tuesday afternoon in Johannesburg.

Police spokesperson Captain Kay Makhubele said there were three people in a silver BMW when two suspects drove up in a white Mercedes-Benz and started shooting at the car.

The driver‚ 46‚ was killed and the two passengers were injured and taken to hospital.

“The motive of the killing is unknown. Police are investigating cases of attempted murder and murder‚” Makhubele said.

《Randburg》@EMER_G_MED crews on scene of a serious shoot out. Corners of Malibongwe and President Fouchè. Two patients removed from scene. One deceased. Avoid area for forensic investigations. @ewnupdates pic.twitter.com/vj5EYP2Jbc

Paramedics Emer-G-Med said the shooting happened on the corner of President Fouché and Malibongwe Drive in Randburg‚ and two people were injured.

Photographs of the scene‚ shared on social media‚ showed a BMW X5 riddled with bullet holes.

The incident took place at about 2pm.

An apparent turf war between rival foreign kidnapping syndicates is believed to be behind the brazen murder of a motorist at the Glenhove offramp on ...
News
4 years ago

Two brazen shootings in full view of the public in busy streets of Johannesburg have been linked to a multimillion rand tender deal and a money ...
News
4 years ago