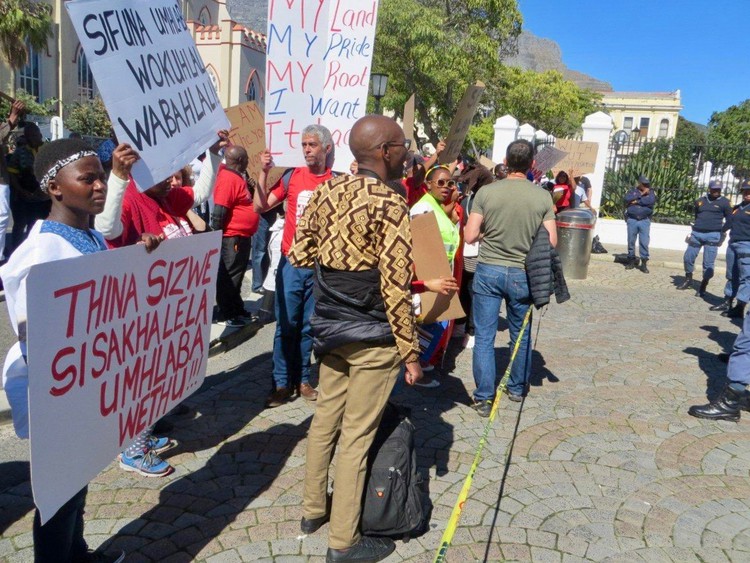 Dozens of representatives from various rural and township organisations from across the country protested outside Parliament on Tuesday over land redistribution.
Image: Vincent Lali

Dozens of representatives from various rural and township organisations from across the country protested outside Parliament on Tuesday over land redistribution.

They included farm workers‚ labour tenants‚ restitution claimants‚ people from mining-affected communities‚ people living under the Ingonyama Trust‚ members of the inner-city occupations in Cape Town‚ and others.

The delegates wanted Smith and Mbete to address them. “We are not happy that Baleka can’t address us. We feel disrespected and invisible‚” a protester‚ Constance Mogale‚ said.

Spokesperson for Alliance David Ramohane read the memorandum of demands. “We note the failure of land reform to meet the legitimate land needs of South Africans who were dispossessed under colonial and apartheid rule” and the “increasing capture of the land reform programme by elites‚ business and traditional leaders‚” he said. “We demand an end to corruption and nepotism in the allocation of land.”

The Special Investigating Unit (SIU) is not ruling out the involvement of politicians in alleged irregularities and corruption in the awarding of a ...
News
3 years ago

The first head has rolled as the Hawks move to root out corruption within the elite crime-fighting unit.
News
3 years ago

Deputy President David Mabuza says he is prepared to prove his innocence in court and subject himself to a lifestyle audit‚ following accusations of ...
Politics
3 years ago

He said the organisation wants the government to dissolve the Ingonyama Trust‚ which owns 30% of KwaZulu-Natal in a trust chaired by Zulu king‚ Goodwill Zwelithini kaBhekuzulu. “The Trust must stop violating the rights of people living on the land it administers‚” he said.

Secretary of the KZN Rural Network Mbhekiseni Mavuso said chiefs must not own the land that belongs to the people.

“We demand a moratorium on farm evictions‚ and an end to all BEE fronting through fake equity share agreements‚” said Ramohane.

The organisation wants the government to devise a clear strategy to deal with outstanding farm tenant claims. “Farms must be registered in the names of the people who actually work the land‚” he said.

Ramohane said 23 rural areas exist in the Western Cape‚ Northern Cape‚ Eastern Cape and Free State‚ which the Minister of Rural Development and Land Reform holds in trust in line with the Rural Areas Act. The Transformation of Certain Rural Areas Act makes provision for these to be transferred to municipalities or land holding entities‚ but 23 years after the act was introduced the land has not been transferred‚ he said.

He said semi-privatisation and long leases on state-owned forest areas badly affected the lives of people living in those areas. “We demand that the forest land and houses must belong to us and be registered in the names of our families.”

He said the organisation also demands that the government introduce a “land redistribution Bill” that will make access to land an “enforceable right with priority being given to women and people who already work the land”.

Baby Makgeledisa‚ a member of the North West Land Access Movement of South Africa said: “If we don’t get the land back‚ we won’t allow the general elections to happen.”

Procedural advisor in Parliament Victor Ngaleka received the memorandum and said he would hand it to the relevant committee.