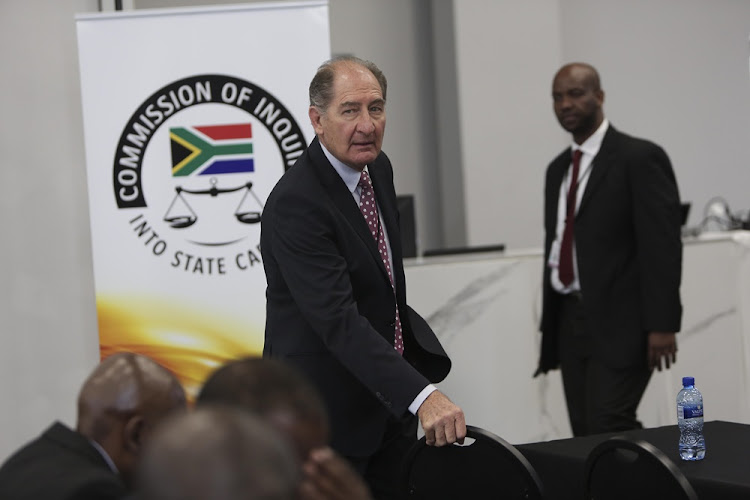 Two whistleblowers who lifted the lid on the Guptas and how they — with the help of former president Jacob Zuma‚ his son Duduzane and senior Cabinet ministers— captured the state‚ are living in hiding and have started new lives outside South Africa.

The country owes these two men a “huge debt“ as had it not been for their bravery‚ the rot and scale of state capture would never have been exposed‚ state witness Brian Currin told the Zondo Commission of Inquiry on Thursday.

“They are fearful of their personal safety. That is the reason they are not willing to testify at this stage‚” said Currin.

“The country owes them a huge debt.”

The whistleblowers were behind the Gupta Leaks and had obtained hard drives from Gupta-owned company Sahara Computers which contained sensitive information on how the infamous family‚ their associates and certain Cabinet ministers had captured South Africa's parastatals.

Fearing for their safety‚ the two left the country before the information could be shared publicly.

Currin on Thursday detailed how a friend had informed him about a hard drive that contained sensitive information.

Currin‚ a lawyer who dealt with issues of whistleblowers in the apartheid era‚ recalled how he had received a call from a friend who asked him to assist another person named Stan who had sensitive information.

Currin agreed to meet with his friend and Stan who had the hard drive. A meeting was scheduled for sometime in February 2017.

Currin told the inquiry into state capture sitting in Parktown‚ Johannesburg‚ that his friend believed that he could help Stan with the predicament he was facing. There was another witness named John who was also involved in these secret meetings. The whistle blowers all feared for their lives‚ which they still do.

Currin detailed how Stan had informed him that he could not read the 300‚000 emails but had read some of them and was scared. The emails contained details of communication between senior government officials and the Guptas.

During the meetings‚ the whistleblowers had indicated that they did not want the information to go to the police or any political leaders as they trusted nobody.

Currin testified that despite the political environment being unstable at that time‚ there were people that he still trusted in political leadership.

He said Stan had confirmed that he had placed the hard drive with a trusted friend‚ burnt some of the information onto compact discs and had copied it onto other hard drives he had.

During their meetings‚ the whistleblowers had expressed their fears and said they wanted to leave the country together with their families before the Gupta Leaks could go public.Money was raised for the whistleblowers to enable them to start a new life outside South Africa.

“In their minds they envisaged that they would never return to South Africa. They needed sufficient finds to build a life outside South Africa‚” Currin said.

The team agreed that after leaving the country‚ they would need to stay out of the way for at least two years to observe what would be happening locally.

The Zondo Commission’s legal team has applied for the admission into evidence of three hard drives containing the so-called “GuptaLeaks” emails – ...
News
3 years ago

President Cyril Ramaphosa should “come clean and account” by testifying at the Zondo commission of inquiry into state capture‚ as he was part of ...
Politics
3 years ago

Rajesh “Tony” Gupta has identified himself as the only Gupta brother who was at the family’s Saxonwold home when former deputy finance minister ...
News
3 years ago