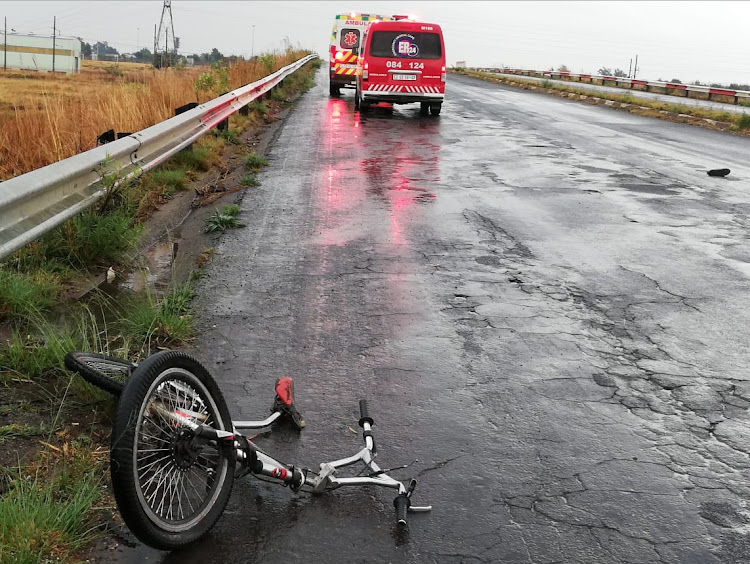 Paramedics found a bicycle lying next to the road and the man’s body a few meters away from it.
Image: ER24

A cyclist‚ believed to be in his late 20s‚ was killed on the R559 in Randfontein on Sunday morning.

Shortly before 8am‚ paramedics from ER24 said they found a bicycle lying next to the road and the man’s body a few meters away from it. He had sustained fatal injuries.

"It appears that he was knocked down by a vehicle. Police were already in attendance and indicated that the vehicle which collided with the man left the scene prior to anyone’s arrival. Sadly‚ there was nothing that could be done for the man and he was declared dead on the scene. Police will be investigating the incident‚" said ER24 spokesperson Werner Vermaak.

Security company Fidelity recently issued advice for cyclists‚ including the need carry identification so that any bystanders can know who you are and who to contact in case of an emergency; and to wear reflective clothing to make sure you are visible to other road users.

Speedster arrested for driving at 229km‚ amid spate of road accidents

A 33-year-old BMW driver is behind bars this weekend after being caught speeding.
News
3 years ago

'Help me': Hero describes how he saved the life of shot cyclist

In an emotional radio interview‚ a former DJ described how he stopped blood pouring from a cyclist who was shot twice in a robbery in Gauteng over ...
News
4 years ago