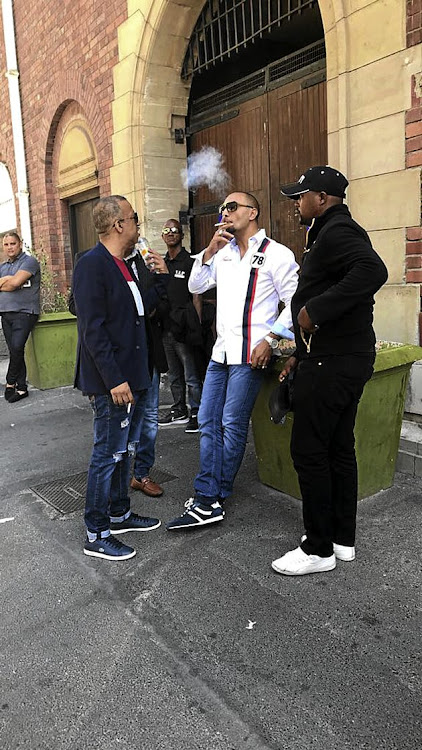 Nafiz Modack outside the Cape Town Magistrate's Court after his appearance in connection with charges of extortion.
Image: Serena Hawkey

The manager of Grand Café Africa, Radley Dijkers, said he "had no choice" but to use the services of TSG, a security company which is allegedly the front for an extortion racket under control of Nafiz Modack.

Dijkers was the first witness in the case against the four men accused of extorting the restaurant at the V&A Waterfront.

He testified there was no existing security contract when he became brand manager of the restaurant, after he was employed by Harbour House Group which owns 26 restaurants across Cape Town in August 2016.

But at the time a company called Leisure and Lifestyle Security was providing security month-to-month and quoted the restaurant at the end of each month for the services rendered.

That all changed in the early morning hours of April 2 this year.

Dijkers said the beach-side venue, synonymous with high-end parties attended by the rich and famous, was busy preparing for an event later that day.

About 1am five cars pulled up to the security gate including a white Porsche, a BMW X5, a BMW 5 series, and two Toyota Avanzas, said Dijkers. He said that as many as 15 men stood outside the security gate talking to one of his managers. The men allegedly explained that Leisure and Lifestyle Security would no longer be providing security services to them but that nothing else would change.

I panicked. I read about the security takeover of nightclubs in the news

Dijkers tried calling the manager of Leisure and Lifestyle Security but there was no answer. He then called the Hawks. "I panicked. I had read about the security takeover of nightclubs in the news," he said.

Carl Lakay, the manager of TSG, allegedly arrived later that day and explained that the security guards would remain the same.

Lakay was the fifth accused in the matter but he was shot and killed in August, shortly after an attempt on the life of Jerome "Donkie" Booysen in a Spur restaurant in Kuilsriver.

That night police from the Cape Town Gang Unit arrived, in full tactical gear with assault rifles, and told Dijkers that they were doing a search of the premises and were conducting inspections of the Psira registration of the security personnel operating on the premises.

Lakay told Dijkers that the managers of the security company would come and meet him early the next week.

The business went back to normal and they traded that Sunday and Monday as normal. On Tuesday, Lakay came back with a group of men, including Grant Verony, who was introduced as the manager of TSG.

The two offered a document with the company's portfolio and said there would be no contract and no quotation, and the restaurant would be required to pay upfront monthly.

No photographs of “legal practitioners” may be taken during the trial of extortion accused Nafiz Modack and three others.
News
3 years ago

Dijkers said he accepted the arrangement because he "didn't have a choice".

He said that they would normally check the credentials of service providers and their BEE status, but that was not done in this case.

Modack, Colin Booysen, Ashley Fields and Carl Lakay pleaded not guilty to charges against them on Monday.

Modack was further accused of interception of communications by allegedly recording conversations he had had with Dijkers over the phone.

He was also accused of the obstruction of the administration of justice.

The case continues on Tuesday.

Anyone who still thinks gangsterism in Cape Town is a “Flats” issue had another rude awakening on Tuesday, when a leading criminal advocate was ...
News
3 years ago

Another shooting in the ongoing deadly "extortion turf war" in Cape Town happened on Friday afternoon‚ this time with the bodyguard of alleged ...
News
3 years ago

A man believed to be the brother of alleged gangster Ashley Fields was shot in the head in Cape Town on Thursday.
News
3 years ago

A man implicated in an extortion syndicate in Cape Town was shot five times in an apparent hit in Belhar‚ Cape Town.
News
3 years ago

Five men accused of extorting money from a Cape Town nightclub had their bail conditions relaxed on Tuesday.
News
4 years ago