Home takes shape for destitute family of seven in Mpophomeni 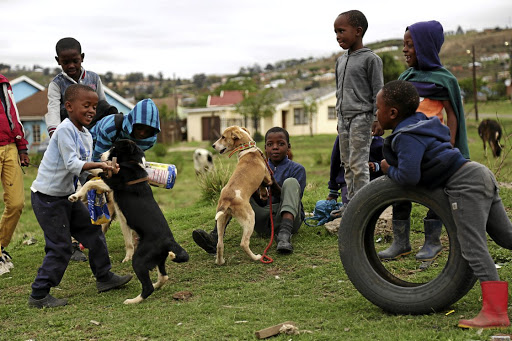 Children train their dogs in Mpophomeni, near Howick, in KwaZulu-Natal, where a businessman and volunteers are building a house for an impoverished family.
Image: Jackie Clausen

A businessman and a group of people descended on Mpophomeni near Howick as their plan to build a house for a family of seven took shape.

Mkululi White raised funds to build the family a home after a Facebook post, which has since gone viral, showed a video of a grade 6 girl carrying a child on her back.

She was singing a popular gospel song titled Mzalwane Qina (Be strong, brethren) which has been performed by a number of recording artists.

The surrounding shots showed a number of other children there with no adult in charge.

The structure of the mud brick house in the background looked worse for wear.

White took the initiative and met the family — single mother Thembi Ngubane and her six children — a week ago.

White bought 5,000 bricks on Sunday which cost R12,500 from a hardware shop in Pietermaritzburg. Another volunteer Thembeka Ndlovu, acting CEO of the Ingonyama Trust Board, bought two doors and bags of cement.

Mkululi and his group of volunteers arrived at Mpophomeni on Monday with a truck carrying the bricks and building supplies to build a three-bedroom home for the family.

Speaking to TimesLIVE on Tuesday, he said his company, which manufactures and supplies protective clothing, had received a number of donations in addition to the R10,000 his company donated towards the project.

He said there had also been donations from as far afield as the UK and Botswana.

White said during their visit on Monday, they donated groceries, clothes and blankets to the Ngubane family.

Three quotations have been obtained from builders for the construction of the house.

"However, we are still short of some of the building material, including building sand, plaster sand and roofing material. Our plan is to build a three-bedroom house with a lounge," said White.

He said TV actor Tony Kgoroge had visited the home with him.

"He has spoken to a recording company, which has seen talent in the girl. The company has offered to record her. However, we want to do this in a way that her school work is not affected," said White.

White and his group of volunteers will visit the family again on Saturday to oversee the building of the house.

We have located the girl she is at eMpophomeni in Pietermaritzburg,They are 6 kids living beyond poverty lines,We are...

Plight of kids who have to fend for themselves

A small businessman has taken it upon himself to build a home for a family of one woman and six children whose cry for help was shared on social ...
News
3 years ago