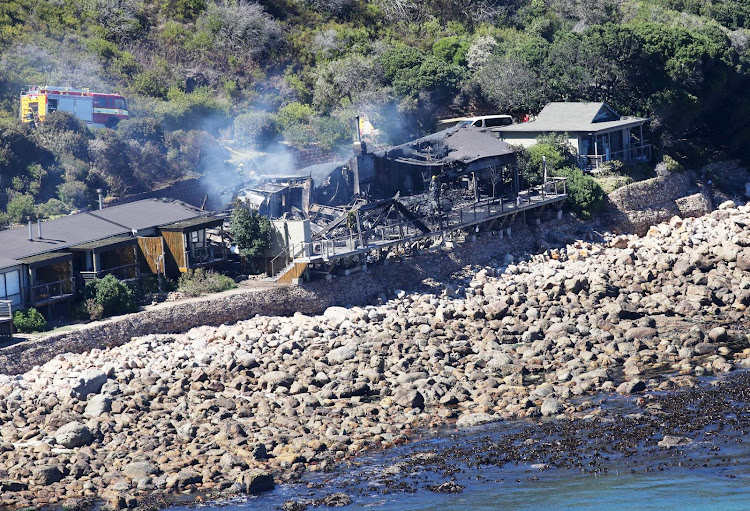 The remains of the main lodge at Tintswalo Atlantic,in Hout Bay, after a fire early on February 5 2019.
Image: Esa Alexander

All guests and staff at a luxury ocean-side lodge in Cape Town were safely evacuated when a fire broke out early on Tuesday.

Tintswalo Atlantic, at the foot of Chapman’s Peak Drive in Cape Town, said the flames had been confined to the main lodge and the 12 cliff-side cottages at the resort had not been affected.

“At approximately 4am ... the early-alert fire system was activated indicating a fire in the main lodge area. Staff on duty fought the fire while the emergency services were called,” the lodge said on Facebook.

For the second time in four years, a luxury Cape Town lodge has been damaged by fire.
News
2 years ago

“The fire department arrived shortly after and guests and staff were safely evacuated. Guests were relocated to the nearby Hout Bay Manor Hotel.

“The fire department is still on site and it is not known yet what the extent of the damage to the main lodge is, but guest rooms were not affected.”

It was the second fire in four years at the luxury lodge. The first, during a massive peninsula-wide wildfire in March 2015, inflicted severe damage but the property reopened just eight months later.

The City of Cape Town fire and rescue service said seven vehicles and 26 firefighters were sent to the lodge early on Tuesday.

An 81-year-old woman died in a fire in her new RDP home at Section G Needs Camp in East London on Monday.
News
2 years ago

Another fire burning on Table Mountain

Parts of Table Mountain were ablaze on Friday evening, the flames fanned by strong winds.
News
2 years ago