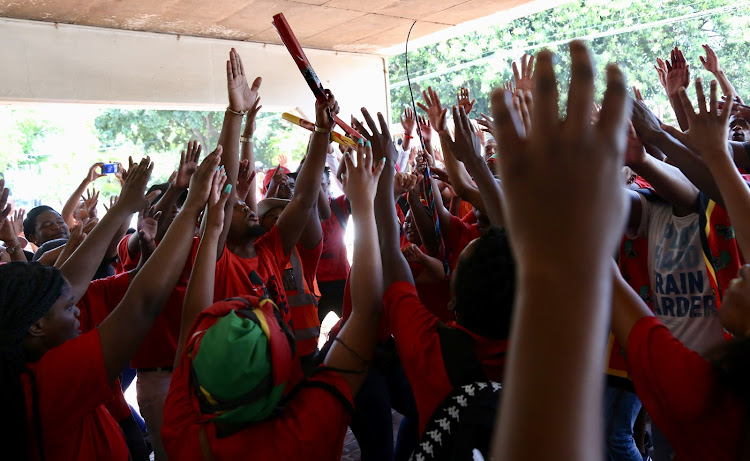 EFF members sing struggle songs at the DUT campus where student Mlungisi Madonsela was shot during a conflict with a private security company on Tuesday.
Image: Jackie Clausen

Two security guards have been suspended following the fatal shooting of a student at the Durban University of Technology (DUT).

Mlungisi Mandonsela, 20, was shot during a scuffle between students and a private security company outside the university's Steve Biko campus on Tuesday.

He was allegedly shot by a security guard and died in hospital that afternoon.

In a statement to students and staff on Thursday the university said: "We can confirm that the two guards have been suspended by the security by the company, pending the outcome of the company's investigation."

Why were bullets shot at students? Tough questions need answering

The university said that it would also be conducting its own internal investigation.

Times Select had reported on Wednesday that the two security guards had been questioned by the police until the early hours of Wednesday after Madonsela was shot in the scuffle between security personnel and members of the EFF Student Command.

Meanwhile, the case against the four students who were arrested for public violence linked to the shooting has been temporarily struck off the court roll by the National Prosecuting Authority.

Provincial police spokesperson Col Thembeka Mbele confirmed on Thursday that the case had been struck off the roll "pending further investigations".

A case of public violence against four Durban University of Technology (DUT) students has been temporarily struck off the court roll by the National ...
News
2 years ago

The EFF Student Command (EFFSC) has accused the Durban University of Technology of being behind the killing of a student who died after being shot ...
News
2 years ago