After years of fruitless job searching, Ayanda Kunene created his own job 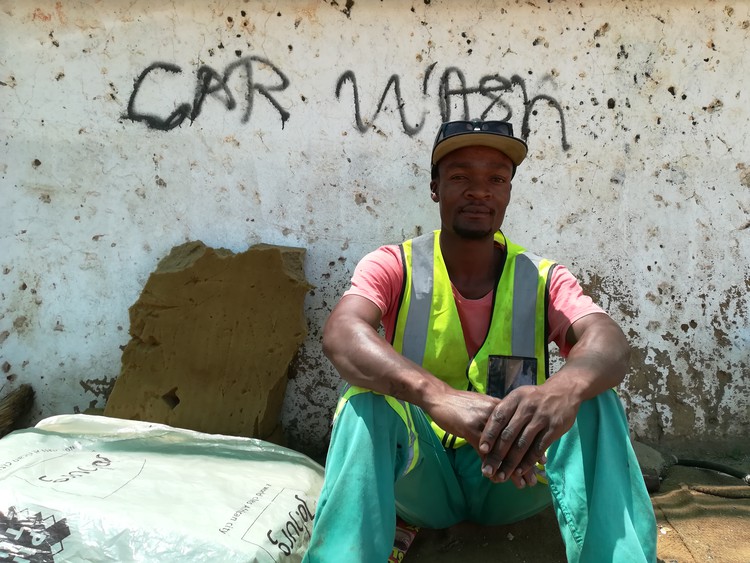 Ayanda Kunene, 30, has never had a permenant job. He started his own car wash in October 2018 after years of searching for work.
Image: GroundUp/Zoë Postman

On a scorching Friday afternoon Ayanda Kunene sits under a makeshift shelter that covers his car wash. He is waiting for customers.

Despite matriculating and actively searching for work, Kunene, 30, has never had a permanent job. His last job was a short stint as a construction worker two years ago. He decided he could no longer depend on other people for work and opened his car wash on a busy road in EbuMnandini, Tshepisong West, in October 2018.

Kunene and his partner charge R50 for a full car wash. He said they wash three to four cars a day. “We make about R200 on a good day … I buy bread, some vegetables and maybe some meat for my family. I give my two children R5 each for school if I can … Sometimes I give my mother some money and the rest goes back into the car wash,” said Kunene.

They say one good turn deserves another, and an encounter at the weekend between a Durban businessman and a jobless Capetonian has proved it.
News
2 years ago

He is trying to save R5 every day until he has enough money to build a proper shelter and pave the car wash. He would also like to buy a compressor, body polish, vacuum cleaners and invest in advertising for the business.

Kunene was born in Cofimvaba, a small town in the Eastern Cape. In search of a job and better schooling for her son, Kunene’s mother moved them to Gauteng in 2001. They moved into a shelter in Tshepisong West. Kunene still lives in a shelter where he pays R400 a month for rent.

He went to Mandisa Shiceka High School in Krugersdorp, about 7km from where he lived. He walked to and from school every day.

Kunene said he enjoyed school because it was “structured and serious”. “We had to go to school at a certain time and do our work every day. I took it seriously because I knew education is very important.”

Kunene hoped to pursue tourism studies at college after school, but instead he had to find a job to support his mother who struggled to find permanent work since moving to Gauteng. He began selling sweets, chips and cigarettes on the side of the road, but soon realised he could not sustain his mother and himself with the money he made.

He submitted his CV to various companies but did not hear back from them. Kunene decided to do a two-month security course at Masakhane Security Training Centre. He said the course cost him about R600.

“I didn’t have any qualifications so I thought that’s why I was struggling to find a job. I thought having a qualification in security would make it easier but I’ve had that certificate for three years now and I still haven’t found anything,” said Kunene.

“It’s really hard, I won’t lie … There are so many people around [EbuMnandini] who are unemployed, yet we still see rubbish lying around and gravel roads in our community,” he said, pointing to a rubbish-strewn field across the road.

“The government should employ people from the community to pick up the rubbish. They really need to create jobs because there is so much to do here.”

This article was published by GroundUp.

Shafted by the Guptas, coal miner community comes together to show beautiful side of SA

It was a dismal Christmas for thousands of coal miners in Mpumalanga when the formerly Gupta-owned coal mines of Optimum and Koornfontein, now under ...
News
3 years ago

Education analyst Nic Spaull believes a fundamental problem with South Africa's education system is that not all students are equipped with the ...
News
3 years ago