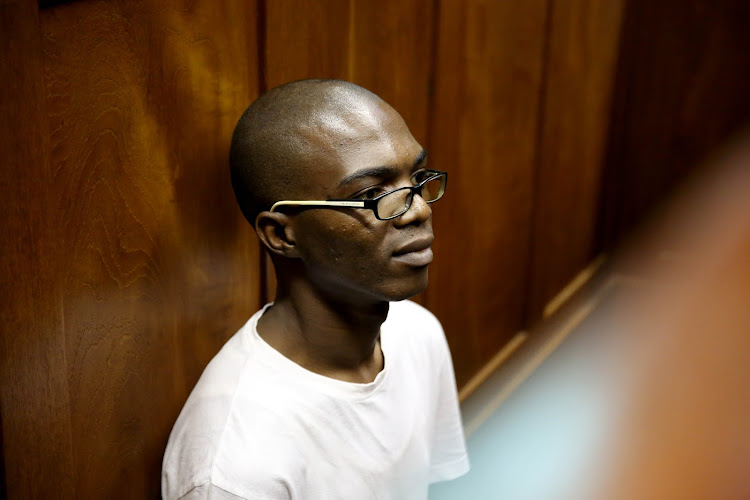 Sibonela Mkhize, who is facing two charges of murder, claims he wasn't present during the alleged hijacking in Shallcross, Chatsworth.
Image: THULI DLAMINI

The man standing trial for the murder of nine-year-old Shallcross schoolgirl Sadia Sukhraj has maintained his innocence.

Sibonelo Mkhize, 39, spent his second day in the witness box in the Durban high court on Tuesday. He was arrested after allegedly hijacking the car in which the schoolgirl and her father were travelling in May 2018.

He faces two charges of murder, the second relating to the death of his alleged accomplice, Siyabonga Blose, as well as robbery with aggravating circumstances.

On Tuesday, a confident and calm Mkhize maintained that on the day of the hijacking, he had been on his way back home from purchasing dagga, when two men had grabbed him and taken him to the scene of the hijacking where he was assaulted.

"One person came from behind, grabbed my arms and locked them behind my back. Another man pulled out a gun," said Mkhize.

The father of Sadia Sukhraj fought back tears as he recalled seeing his daughter's lifeless body at a hospital.
News
2 years ago

Mkhize has also emphatically denied even knowing his alleged accomplice.

"I don't even know Siyabonga Blose. All the things you [the state prosecutor] have said are unknown to me," he said.

The trial, which was set down for two weeks, commenced last week with the girl's father giving evidence. Shailendra Sukhraj told the court that he had fired several shots at the car, as the hijackers drove away with his daughter still in the vehicle, in an effort to stop them from disappearing or harming her.

The matter has been rolled over to Wednesday.

The Daspoort tunnel in the west of Pretoria has been reopened after hijackers burnt a truck after a failed hijacking early Wednesday morning.
News
2 years ago

A heavily pregnant Witbank woman survived being shot in an attempted hijacking and gave birth just a short while later - after somehow managing to ...
News
2 years ago

Durban pre-school teacher and mother-of-two Kjersti Skanke's only instinct was to protect the five children on her property when armed men pounced on ...
News
2 years ago