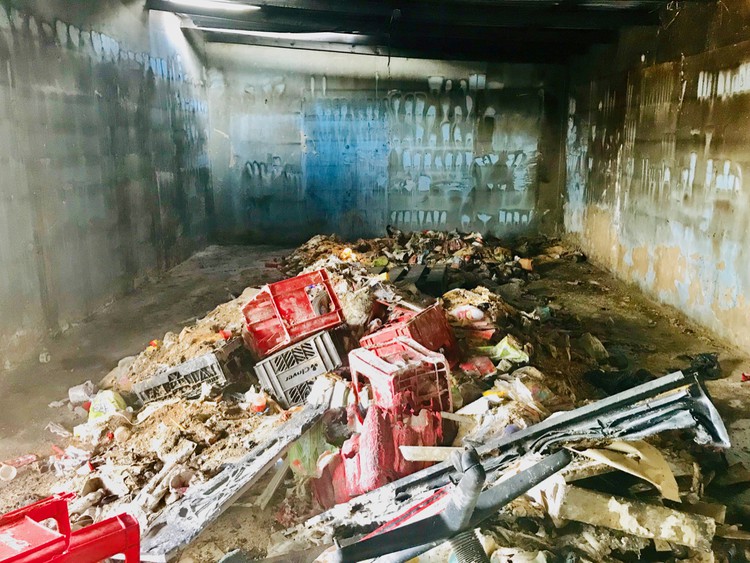 Premises leased out by a South African to an Ethiopian man were torched in KwaThema. The shopkeeper had to flee.
Image: Kimberly Mutandiro

During protests in Kwathema, last week, immigrants were terrorised and their shops looted. Some immigrant shops have remained closed.

Somali shop owner Boyca Ahmed says he pays for “protection” during protests by giving cash, cooldrinks and paraffin to protesters.

"Those who do not contribute do not have protection during the protest and their shops get broken into," says Ahmed, who is 29 years old and came to the area in November 2018.

Ahmed says he also pays a total of R4,000 a month to two men who "protect" and give him information whenever looting is planned.

"I can say that l am a lucky man. No one touches me or my stock now," he says.

The community of Extension 3 is planning a protest next week. Boyca Ahmed says he already has some paraffin and drinks to give to the planners of the protest.

Seven suspects are on Friday expected to file a bail application after being caught red-handed enjoying allegedly stolen "expensive alcohol" and ...
News
3 years ago

On March 8, Thuso Johannes Mamkwe, according to Kwathema police, was shot in the neck in a confrontation with an "Ethiopian national" and died. The Ethiopian fled and the community looted the shop, according to police. Three cartridges were found at the scene. No arrests have been made.

"Joseph" had a nine-year lease with Zongole Mjoli, agreed in 2016.

Mjoli said that last week he was awoken at night by stones smashing his windows and landing on top of the roof of his shack in Extension 3, Kwathema.

"Everyone knows that when stones are thrown on top of the roof … a mob has come knocking," said Mjoli.

"It was terrifying. Voices were shouting that they had come for the Somali man, who was running a shop on my yard. Some were chanting, demanding that l open my gate."

Luckily, police had taken "Joseph" to safety earlier that day.

Mjoli said the mob broke into the shop and looted what they could. They stripped the metal shelves and doors. Then they poured paraffin and set a match to what remained.

The fire department extinguished the fire, but much of the stock had already been incinerated.

Some of the equipment stolen from a new multi-million rand school in Tsakane, Ekurhuleni, has been recovered, the Gauteng education department said ...
News
3 years ago

"Joseph" had nothing to do with the shooting, said Mjoli.

"I do not not know if he will come back because he is no longer answering my calls. The money which l got from renting the shop to him was my only source of livelihood as l am unemployed," he said.

Ahmed says the Somali community is putting money together to try to help "Joseph".

"Immigrant shop owners are caught up in the middle because people are trying to catch the attention of the government," said resident Nurse Mota.

"We have been living in shacks since 2007. Although we now have electricity and toilets, we still do not have houses," said resident Mthunzi Msezane.

The community has held protests every two weeks for the past three months.

"The most frustrating thing is that the municipality switches off our electricity and water asking us to pay rent. When we go to the office to pay rent they give us utility bills which are under other people’s names. We want our houses to be registered in our names. How can l pay rent for a stand that does not belong to me?" asked Msezane.

Two women carrying devices to thwart metal detectors in store entrances have been arrested after a months-long shoplifting spree at Cape Town malls.
News
3 years ago

Mota said,"My stand is registered under Mphahleli. I don’t know who that is."

Msezane says he does not know why people loot when the protests are not about immigrant shop owners.

"I feel sorry for the Somalis,” says South African fruit and vegetable vendor Smangaloso Mbaso,” because if they do not give the planners what they want their shops are looted."

"No one will dare loot my vegetables," he says. "We do not even know who plans the protests. The protests start anytime and we are not even told."