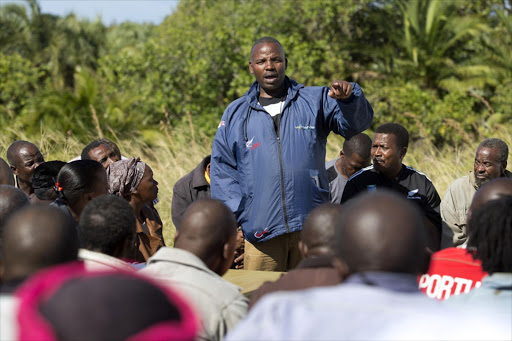 Rhadebe was killed assassination-style on the night of March 22 2016, when two men posing as policemen shot him eight times in front of his family.

"It is absolutely shocking that three years on from the gruesome killing of 'Bazooka' Rhadebe, his family and the public at large remain in the dark about the motive for the killing – let alone the family finding closure for the horrific killing of their father, brother and cousin,” said Shenilla Mohamed, executive director of Amnesty International SA.

"The state's silence is deafening."

Amnesty International is calling on the South African government to respect a high court decision that stopped mining in the Xolobeni community in ...
News
2 years ago

Mohamed called on law-enforcement agencies to escalate their investigation and make sure that those responsible are brought to justice.

"Most importantly, authorities must regularly give progress reports of the investigation to his family so that they are informed of every step taken by the authorities," said Mohamed.

According to Amnesty International, at the time of his death Rhadebe was the chairperson of the Amadiba Crisis Committee (ACC), a community-led initiative that has been opposing the opencast mining of titanium and other heavy minerals on communal land in Amadiba in the Eastern Cape.

"The ACC, which was established in 2007, has been fighting to protect the community's rights to their ancestral land," said the organisation.

"Shortly after the killing of Rhadebe, the investigation was taken over from local police by the Directorate for Priority Crimes Investigation (DCPI),  commonly known as the Hawks."

The Hawks told the family in 2018 that the investigation was continuing.

"Bazooka's family deserve to know who was behind the killing, and the authorities must ensure their right to truth and justice. Justice delayed is justice denied. Impunity should not be allowed to take over," said Mohamed.

Human rights attorney Richard Spoor was arrested after a heated fracas with mineral resources minister Gwede Mantashe on the Wild Coast on Sunday.
News
2 years ago

The execution style killing of a leader of the Wild Coast anti-mining campaign has been condemned by the National Union of Metalworkers of South ...
News
5 years ago

Still no justice for ‘Bazooka’

A delegation from the mining ministry told the Wild Coast coastal Amadiba community on Friday afternoon that they did not understand why they opposed ...
News
5 years ago