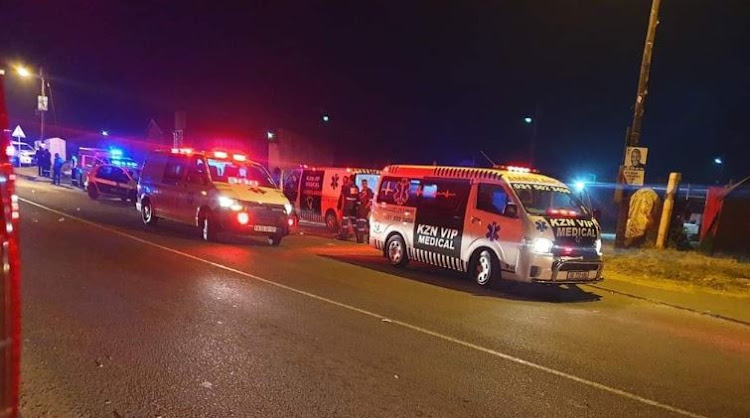 Police are on the hunt for suspects who shot and killed two metro police officers and stole their firearms on Monday night.

“They were stationed outside the councillor’s home in Bhambayi, between Fernham and Stoneham, when suspects fired multiple shots at them, killing the male in the driver’s seat and the female, who was also in the vehicle.”

He said the two officers, an inspector and constable, aged between 37 and 60 years old, were then robbed of their firearms.

“I can’t speculate on the motive for the killings. The metro police family is in shock and a manhunt is under way for the suspects.”

He said the ward 52 councillor, Moses Zulu, was not injured in the attack.

The man shot in an apparent hit on the N2 freeway south of Durban on Friday has been an identified as an off-duty policeman.
News
3 years ago

Zulu told TimesLIVE that he feared for his life after the shootings.

“This was definitely an attack on me, when people shoot at the police who are in my yard to protect me. The government identified that I needed protection after there were threats against my life.”

He said he heard the gunshots and went outside, but only heard people running away.

“The police were already dead. It was very sad."

Zulu said there were ongoing issues in the Bhambayi community with regard to service delivery protests.

“It is well known there are issues in my ward."

“Two metro members came under fire and two cases of murder and armed robbery have been opened at the Phoenix Police Station.”

It is understood the shootings will be investigated by the provincial task team.

A man believed to have been involved in a string of murders in KwaZulu-Natal and at a Soweto hostel was arrested after a shootout with police.
News
3 years ago

Anele Ntlati was walking to work after buying lunch when he heard gunshots and felt his leg go numb.
News
3 years ago

Witness in KZN political murder gunned down in apparent hit

A member of the ANC was brutally killed in an apparent hit in northern KwaZulu-Natal on Sunday.
News
3 years ago