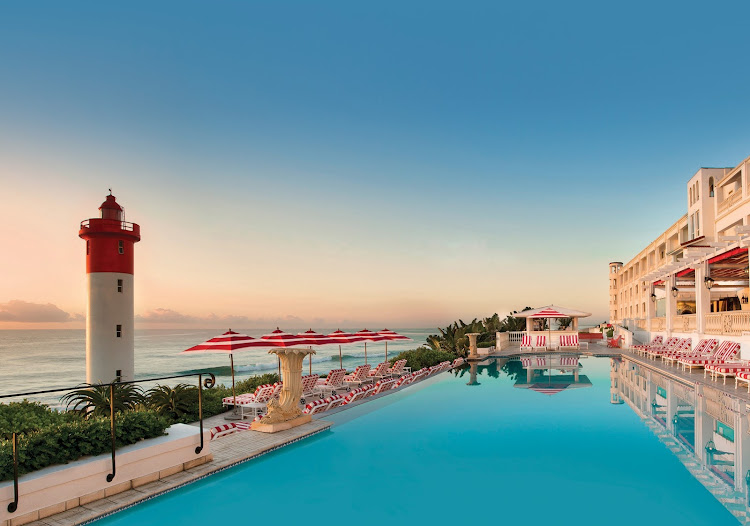 The Oyster Box Hotel in Umhlanga obtained an interdict in the Durban High Court against 'EFF demonstrators' after a labour dispute but the party denied any involvement.
Image: The Oyster Box

The luxurious Oyster Box Hotel - the chosen venue of international stars visiting Durban - secured an urgent interim interdict against the EFF on Tuesday.

The legal action comes after protesters wearing political party T-shirts gathered outside the only entrance to the exclusive hotel and harassed guests.

They purported to be acting on behalf of disgruntled employees and threatened to escalate the protest if their demands were not met.

In an affidavit, deputy general manager Tracey Liebenberg said the protesters had gathered outside the hotel at noon on Monday. She said they had no right to be there as  they were not a union, merely a political party, and could not represent any staff members.

"They had no legitimate purpose. The EFF is attempting to infuse itself, for political gain, into the labour relationship between the hotel and its employees."

"It is a distinct asset in the area and a major contributor to the local economy."

She said "aggressive, threatening conduct" was not only unlawful but was extremely damaging to the reputation of the country.

She said the protesters had interfered with people and cars entering and exiting the premises through the only gate.

They were toyi-toying, dancing and shouting.

"While we as South Africans may be accustomed to this, visitors to our shores and guests at the hotel would certainly not be and would be intimidated," she said.

"Most disturbing" was when they were approached, they seemed to be aware that one of the hotel's major shareholders was staying there.

Liebenberg said hotel management accepted a memorandum from the protesters in order to placate them.

In it, the EFF demands that the company "end racial discrimination" and investigate "acts of sexual harassment."

"It is the responsibility of the EFF in line with its policies and constitution to defend any citizens who are vulnerable due to the imbalances of power in the workplace," the unsigned memorandum states.

Liebenberg said the allegations "which were extremely damaging" were untrue.

"Our employees have never raised grievances or referred such grievances to the CCMA or any other labour organisation," she said.

Judge Mnguni ordered that the EFF and certain named protesters be interdicted from obstructing the hotel's gate, from harassing guests and staff and interfering with the employment relationship between the hotel and staff.

The EFF, whose members were not at court, has until June 11 to file papers arguing why the interdict should not be made final.

However EFF KZN provincial chair Vusi Khoza denied knowledge of the protest action outside the hotel.

"We have no knowledge of an EFF protest. Any fool can wear an EFF T-shirt and purport to be a member of our party. But I can tell you, as the provincial chair that this [protest action at the hotel] wasn't mandated by our office.

"A legal team came to our office at about 2pm and tried to get us to accept papers but we refused because we don't know anything about this. If there was a problem, the hotel should have approached us the same way the legal team found us."

Khoza said the EFF was not aware of any employee issues at the hotel, but said if it was true that there were incidents of racial discrimination and sexual harassment the veracity of these should be tested.

What is a sensible sum to spend on a Christmas meal? R324 for the family, says Statistics South Africa.
News
3 years ago

The carcass of a massive humpback whale washed up at the foot of upmarket hotels The Oyster Box‚ Pearls and the Beverly Hills in Umhlanga on Tuesday.
News
3 years ago