No answers nine months after Thuthukile Mabaso was murdered in Manenberg 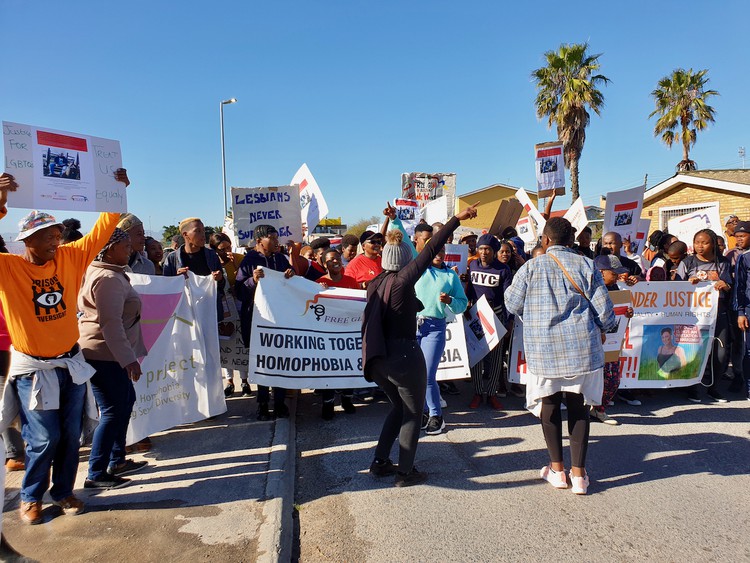 About 60 people with placards reading “Homophobia hurts” and “Stop killing our brothers and sisters” marched through the streets of Gugulethu to the police station in Manenberg on Friday.
Image: GroundUp/Mary-Anne Gontsana

About 60 people with placards reading “homophobia hurts” and “stop killing our brothers and sisters” marched through the streets of Gugulethu to the police station in Manenberg on Friday.

They are demanding answers from Manenberg police after the body of Thuthukile Mabaso, who was lesbian, from NY4, was found next to the railway line in Manenberg in September 2018. She had been raped.

The march, organised by LGBTIQ organisations, Free Gender and the Triangle Project, supported by Sonke Gender Justice, also aimed to highlight what they say is the police’s failure to solve cases of hate crimes and killings targeting LGBTIQ people in townships.

“I am not okay” Mabaso’s 22-year-old brother, Siphumelele, tearfully told marchers on Friday.

He recalled the day one of his sister’s friends came to tell him that the body of a gay person had been found “suggesting that it might be Thuthukile”. He said he eventually identified her body at the state mortuary in Salt River on September 22. It was also the day of his 22nd birthday.

He said there were unanswered questions surrounding her murder because the matter had been dismissed due to a of lack of evidence.

Free Gender’s Funeka Soldaat said, “When we say that lesbian cases are not prioritised, it’s like we are complaining or being difficult.”

She said Mabaso’s case was not an isolated one in the Nyanga police cluster. “Phumeza Kolonzi was killed in Nyanga in 2012 and Sihle Sikoji was killed in 2012 in Kosovo. We have no information about these cases from police. We can’t be investigating cases ourselves. We cannot allow these killings,” said Soldaat.

The memorandum was accepted by the station commander in Manenberg, Colonel Sanele Zama.

Changes in geopolitical forces are sweeping rapidly across the world, affecting the lives of many, for better and for worse.
News
2 years ago

Cuban gay rights activists held an unauthorised independent pride parade in Havana on Saturday despite the Communist government warning against it ...
News
2 years ago

The inclusion of LGBTIQ+ community has been neglected in textbooks

Pupils and activists from the LGBTIQ+ community have strongly condemned the authors of South African school textbooks for "airbrushing them out of ...
News
2 years ago