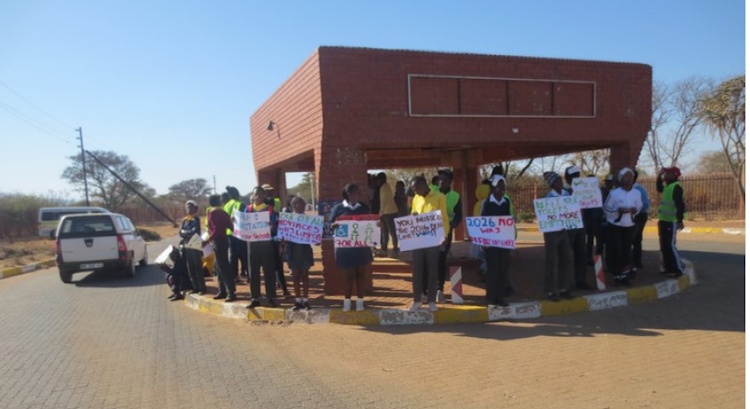 Equal Education (EE) members picket outside the provincial legislature in Limpopo on Friday. They are demanding that government prioritise the provision of water and adequate toilets to schools.
Image: Bernard Chiguvare at GroundUp.

A group of 34 Equal Education (EE) members picketed outside the provincial legislature in Limpopo during Premier Stan Mathabatha’s state of the province address on Friday. They were demanding that government prioritise the provision of water and adequate toilets to schools.

Early in 2018 SECTION27 took the Limpopo education department to court on behalf of the parents of five-year-old Michael Komape, who drowned after falling into a dilapidated pit latrine at his school in January 2014.

But in April 2018, four years after Michael’s death, the judge in the Komape case ordered the department to give the court “a list containing names and locations of all the schools in rural areas [of Limpopo province] with pit toilets for use by the learners”.

In April this year, learners from the Rivoni School for the Blind in Elim blockaded roads after their complaints about broken toilets and showers went unanswered.

During his speech on Friday, Mathabhatha announced that R192m would be spent to “address the backlog of school sanitation infrastructure in 100 schools across the province”.

Outside, learners and EE supporters chanted and held up posters. “There are only two pit toilets for the whole school. So during break time, there is a long queue,” said a grade 12 learner at Seipone Secondary.

EE member Sibongile Teffo said, “We are picketing to remind Premier Mathabhatha about the state of toilets and access to water at schools in the province and that the department [of education] should meet the [Norms and Standards for School Infrastructure] deadline in November 2020.”

In a statement, Equal Education said, “We are appalled at the Limpopo department of education’s ‘plan’ to fix school toilets. The ‘plan’ submitted by the provincial department and the department of basic education (DBE) to the Polokwane High Court, in accordance with an order of court in the Michael Komape case, is an insult to Limpopo learners and teachers.”

City apologises for toilets dumped in informal settlement by mistake

The city of Cape Town has apologised for dumping broken and dirty communal toilets in the Bonnytoun informal settlement in Wynberg by mistake.
News
3 years ago

Parents locked out the principal and teachers at Bhekabantu Primary School in Tafuleni, Pietermaritzburg on Tuesday, demanding that the principal be ...
News
3 years ago