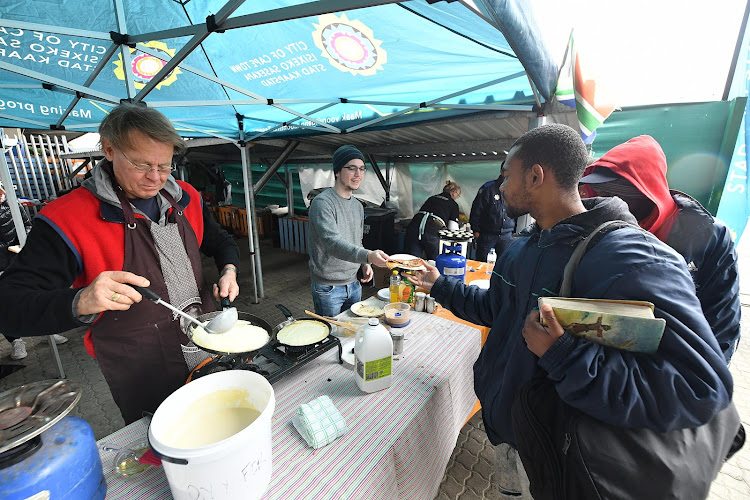 Homeless people receiving food in Cape Town. Handouts directly to beggars do more harm than good, as they keep people on the street instead of taking up the services that are available, says the city.
Image: City of Cape Town

There are more than 6,000 people living on the streets and in shelters in Cape Town – most of them men.

This was revealed on Thursday when the city released data on its latest enumeration of street people, conducted over 18 days in November 2018.

A breakdown of the numbers indicated that 3,999 people were sleeping on the street and 2,084 were using shelters. The figure was around 16% lower than the figure arrived at during the previous count, in 2015.

City of Cape Town city authorities have drawn sharp criticism recently, and been accused of harassing people who live on the streets, in particular ...
News
2 years ago

In the past the city encouraged the public to donate to shelters instead of making direct handouts but now, after the launch of the 'Give Dignity' campaign, drop-off points were being made available at city libraries for anyone wanting to donate.

The survey identified the Cape Town CBD and surrounds, as well as Mitchells Plain and Bellville as areas with the largest populations of street people.

Among the recommendations were:

"While we set out to plot the way forward for Cape Town, we ask our residents to work with the city to find lasting solutions. Most critical is to support our ‘Give Dignity’ campaign, which will ensure that donations are distributed to registered organisations working with street people and the city’s Safe Space for street people. It is a fact that indiscriminate handouts do more harm than good, as they keep people on the street instead of taking up the services that are available to them," said mayoral committee member for community services and health Zahid Badroodien.

"Our street people population statistics will enable all levels of government to make necessary policy changes aimed at increasing or improving initiatives to support those individuals who sleep rough in the city."

The city drew flak recently for fining homeless people but city officials said they were not targeting the homeless but enforcing bylaws after being inundated with complaints by residents.

The City of Cape Town is dominating conversation on Twitter following a report that they will be fining the homeless for the obstruction of ...
News
3 years ago

Stab wounds are best cured in the sea. If you want to keep your surfboard, sleep on it at night. This is some of the hard-won wisdom of the homeless ...
Lifestyle
3 years ago