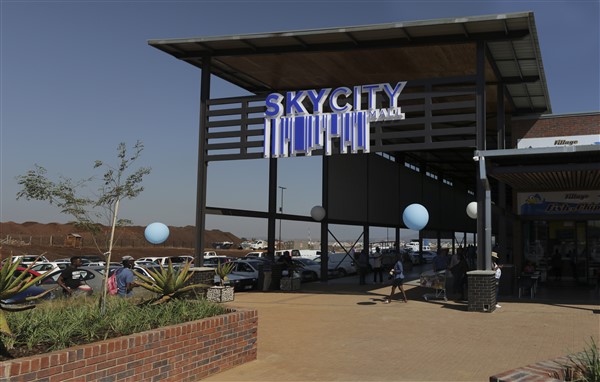 Two members of an armed gang attempting to rob Sky City Mall were arrested thanks to the actions of a brave staff member.
Image: Sky City Mall via Facebook

Gauteng police had two of the easiest arrests imaginable this week: Their suspects were already locked up.

This was because a quick-thinking employee at the Sky City Mall in Kliprivier had trapped two armed robbers in a safe.

Police also recovered a firearm which they allegedly used to shoot at the safe door, which failed to open.

The suspects were part of a gang that terrorised the employees of the mall, Dlamini said. Others managed to escape in a getaway vehicle, leaving their accomplices behind. Police have launched a manhunt for them.

Dlamini described how the arrests unfolded, saying: "Members of the K9 Unit, Flying Squad and local police officers had surrounded the complex when they heard that the suspects were trapped inside the safe. They entered the premises and managed to arrest the suspects."

The suspects sustained minor injuries during the arrest and were taken to Sebokeng Hospital under police guard.

They will be charged with cases including attempted murder, business robbery and possession of an unlicensed firearm.

Dlamini added: "The suspects are being profiled as they may be part of a gang that are involved in serious and violent crimes, including business robberies and hijacking of vehicles."

Four armed robbers escaped with a loot of watches after they struck a jewellery store at a popular Durban mall on Friday.
News
1 year ago

Police are currently in pursuit of four heavily armed suspects following what is believed to be an armed robbery near the Pavilion shopping mall on ...
News
1 year ago