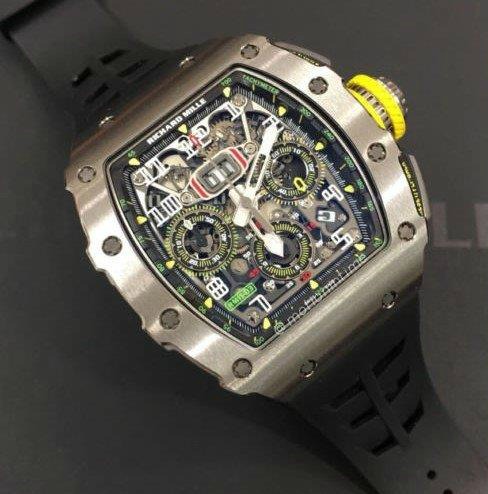 A Richard Mille watch worth R2.9m, like the one pictured, was stolen in the heist at the weekend.
Image: Supplied

A watch worth R2.9m was among the luxury items stolen during a business robbery at an upmarket jewellery and watch store in Sandton, Johannesburg, at the weekend.

The House of Ameera at Nelson Mandela Square is still shaken after the robbery which left one staff member injured and others terrified after armed robbers stormed the shop on Sunday.

A Richard Mille watch worth R2.9m and an Audermars Piguet watch with a price tag of about R500,000 were taken during the robbery, the store confirmed.

The store was also robbed of 19 rings, diamond stones, Rolex watches and R280,000 which had been kept in a safe, said the store's Taybah Moosa.

During the ordeal, two males and a female wearing a black dress walked inside and posed as potential customers. They asked to be showed luxury goods, including the two expensive watches.

Three days after the incident, police had not made any arrests and were still hunting for the suspects. "Police investigations are under way, no arrests have been made," said police spokesperson Granville Meyer.

The store confirmed that a private investigator had been appointed to help with the investigation.

"Located on Africa's richest square mile ... House of Ameera is a treasure trove of only the finest luxury pre-owned watches and new jewellery from world-renowned brands," the store says on its website.

The Nelson Mandela Square Mall management said on Twitter that it was co-operating fully with authorities probing the case.

The Mall, together with its tactical security team have been co-operating with private investigators and the SAPS with regards evidence for this investigation.

Security remains a priority for Nelson Mandela Square and the mall continues to trade as normal.

An employee said she was traumatised and hoped police would soon make an arrest.

"These people are clearly good at such things. What if they come back or go to another shop? Our cellphones and laptops were also taken, they basically took everything they could get their hands on," she said.

She said employees had been instructed to lie down while the trio ransacked the store and forced them to open a safe containing cash and some goods.

A reward of an undisclosed amount has been offered for information helping to solve the case.

Have you seen this woman? She's wanted by cops over R8m Sandton jewellery heist

On what was meant to be a quiet Sunday afternoon at Nelson Mandela Square in Sandton, Johannesburg, three people posing as customers robbed a ...
News
2 years ago

Four armed robbers escaped with a loot of watches after they struck a jewellery store at a popular Durban mall on Friday.
News
2 years ago