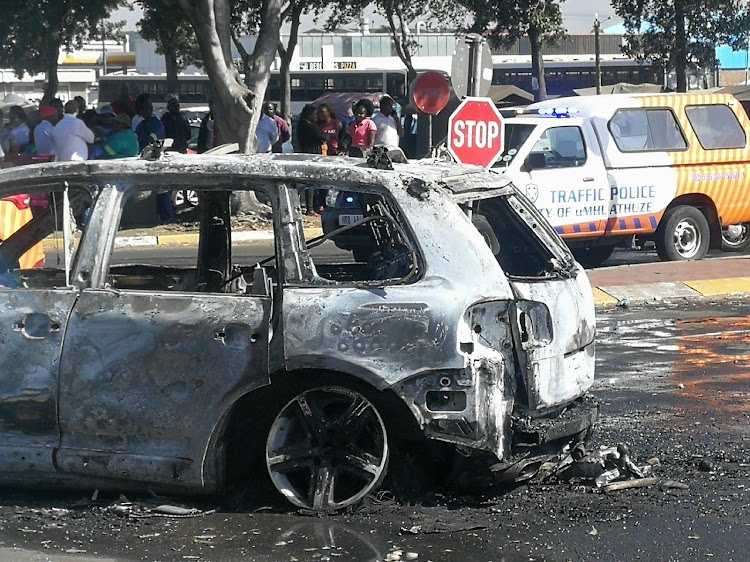 A burnt out vehicle at the Richards Bay SMME Park, opposite Taxi City, after community members set it alight on Thursday
Image: Twitter/@UmhlathuzeM

Angry Richards Bay residents took the law into their own hands on Thursday morning following the murder of a popular bus driver.

The central business district of the northern KwaZulu-Natal coastal town was plunged into chaos as community members stormed the SMME Park, opposite the taxi rank, where they proceeded to stone a building and nightclub which is understood to be a popular hangout for drug dealers and substance abusers.

Provincial police spokesperson Capt Nqobile Gwala confirmed that police had been deployed to restore calm to the area.

It is understood that members of the public order police used stun grenades and teargas to disperse hundreds of protesters.

[WATCH] Community storm an area where drug dealers are known to have been operating in the Richards Bay, northern KZN. Their anger is believed to be fueled by the murder of a bus driver who was stabbed and robbed by alleged substance users on Wednesday. @TimesLIVE pic.twitter.com/bNhPSYu5Yo

"We can confirm that a vehicle was set alight in Richards Bay CBD by unknown people, however our members are still busy at the scene."

Information supplied to TimesLIVE suggested that the protests had been linked to the murder of a bus driver who had been stabbed and robbed by alleged substance abusers on Wednesday.

Gwala corroborated this information and confirmed that a 55-year-old man had been murdered within the vicinity of the bus rank on Wednesday.

"Yesterday at 5.50pm a 55-year-old man was found with a stab wound on the neck. It is alleged that the victim was going to board a bus at Bullion Boulevard Road in Richards Bay when he was attacked by unknown suspects who robbed him of his valuable items and cash. He was certified dead at the scene," she said.

Police are monitoring the situation.

About 70 people gathered on the streets of one of Cape Town's most notorious gang suburbs before dawn on Wednesday to call for an end to bloodshed.
News
2 years ago

If you're a drug dealer in Cape Town, you really don't want to meet Savage.
News
2 years ago

'Dealers' nabbed with R250,000 worth of cocaine and ecstasy in Durban

Police have made yet another massive drug bust in Durban, this time in the quiet suburb of Westville
News
3 years ago