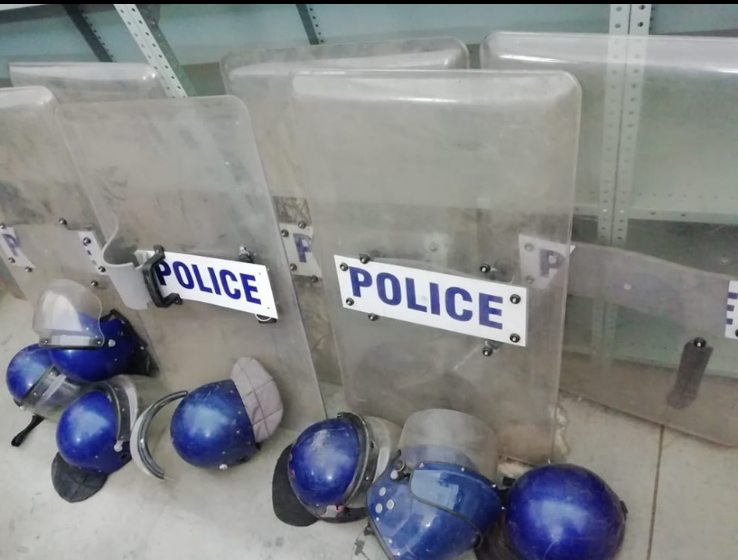 Police arrested two suspects after finding SAPS protective gear and drugs in a storeroom at a block of flats in Hillbrow. Image:
Image: Supplied by SAPS

Police traced and arrested two suspects on Friday evening after earlier in the day recovering protective gear used by the SAPS Public Order Police at a block of flats in Hillbrow, Johannesburg.

“Police earlier in the day conducted an #OKaeMolao operation where a number of buildings in Hillbrow had been flagged as generating high volumes of contact crime.

“Other buildings visited were Kiribili, Eastgate, Florence Nightingale and O'Riley; and police arrested 22 undocumented foreign nationals, two suspects for possession of and dealing in drugs. Two illegal liquor outlets were closed and liquor confiscated. Three more suspects were arrested for business robbery at Joubert,” Gauteng police said in a statement.

Gauteng provincial police commissioner  Lt-Gen Elias Mawela has called for an urgent investigation by a team of seasoned investigators at provincial level to establish how protective gear used by the Public Order Police landed in the wrong hands.

"The extent to which criminals have now gone to undermine the authority of the state is very disturbing. No effort will be spared in finding out the source of supply pending confirmation of whether indeed the gear is state-issued or replicas. Whatever the case, we believe the intention to own state property is still criminal," Mawela said.

Police arrested seven suspects, including a police constable, in Johannesburg on Thursday for allegedly plotting a cash-in-transit heist.
News
2 years ago

Four police officers and a security guard were arrested after they allegedly kidnapped, assaulted and attempted to extort R50 000 from two people in ...
News
2 years ago

A spate of hijackings and robberies targeting tourists in the Mpumulanga areas of Graskop and Sabie have seen tourism associations warning travellers ...
News
2 years ago