Attacks on police by foreigners and the seizure of 'counterfeit' goods: A timeline 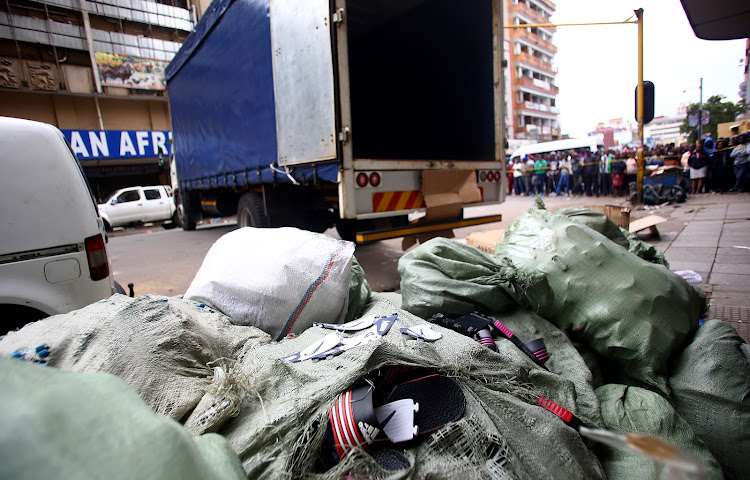 The inner city of Johannesburg spiralled into chaos last week when police officers clashed with shop owners whose allegedly fake goods they had seized. Authorities and the SA Human Rights Commission (SAHRC) have condemned the attacks.

Here's a timeline of events:

On Thursday, members of the SA Police Service and metro police embarked on a mission to confiscate "fake" goods sold by foreigners in the city centre. The shop owners resisted by attacking officers and damaging their vehicles.

Traffic was disrupted and motorists had to use alternative routes. Videos of angry shop owners throwing rocks at police circulated on social media platforms, sparking a public outcry about lawlessness in the country.

The SAHRC on Friday released a statement in which it said the attacks on police undermined the constitution and urged members of the public to abide by the law.

"All inhabitants of the republic must abide by the laws of the country without exception and allow law enforcement officials to conduct their duties without hindrance," the statement said.

Tina Joemat-Pettersson, chairperson of the portfolio committee on police, also condemned the attacks, saying they were "unacceptable". She urged officials to return to the city centre and finish their mandated tasks.

The state justice, crime prevention and security (JCPS) cluster said the government took attacks on its members seriously and considered them attacks on the state. It condemned vandalism and the destruction of property.

Makhura, on Twitter, alleged the shop owners were not only selling fake goods, but had also hijacked the city's buildings and, therefore, had to face the law.

Mashaba shared a picture of an SA Revenue Service (Sars) official who was attacked during the protests, and asked why no arrests had been made.

Gauteng police spokesperson Brigadier Mathapelo Peters said police officials withdrew from the confrontation as their continued presence could have resulted in injuries and deaths. "Due to the volatility of the situation, police retreated to avoid a situation where they would be forced to use live ammunition."

A riot broke out in Jo’burg CBD when police confiscated counterfeit goods from street vendors. Officers fired rubber bullets in an attempt to disperse the crowd. In retaliation, protestors pelted officers with bricks and bottles. Provincial police say officers ‘tactically withdrew’ from the operation to avoid being forced to use live ammunition.

The South African Human Rights Commission has condemned the attack on law enforcement officials in the Johannesburg CBD on Thursday.
News
2 years ago

WATCH | Blood, bricks and rubber bullets in Joburg - but why no arrests asks Mashaba?

More footage has emerged of the "street battle" that played out when police came under attack by angry hawkers and street vendors in Johannesburg.
News
2 years ago