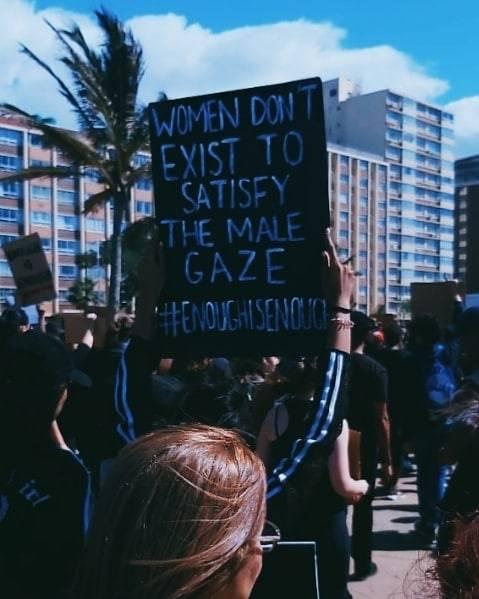 Thousands marched against violence against women in Durban on Saturday
Image: Facebook

As slain University of Cape Town student Uyinene Mrwetyana was being laid to rest in East London on Saturday, about 3,000 people armed with strongly-worded placards marched against women abuse in Durban.

The Justice for Women march - along Durban’s beachfront - was arranged by seven women who were "outraged, shocked, hurt, confused and angry at the way men have been treating women".

Men, women and children - dressed in black - walked along the promenade with placards which called for an end to the abuse of women.

"The end of women’s month was deafeningly concluded with the end of yet another woman, Uyinene Mrwetyana’s life.

"Although we didn’t know her - or all the scores of South African women who have been harmed, harassed, assaulted, raped or murdered by men - we felt as though the brutal blowing out of her candle was another blow to our kind. Another blow to us," said Jade O’Shea, one of the organisers in a Facebook post.

"The consequence of our culture had incited a collective consciousness. Every single woman we spoke to felt the same."

O’Shea said the march was in response to their outrage.

"We are not event organisers. We are not activists. We are seven women who invited other people that feel the way we do, to walk with us at the beach, on a Saturday morning - and 3000 people agreed," she said.

President Cyril Ramaphosa has announced a host of measures against gender-based violence in the wake of protests against the increasing rate of rape ...
Politics
2 years ago

Cape Town high school students on Friday joined in the nationwide call for gender-based violence to be rooted out of South African society.
News
2 years ago

Thousands of people took to the streets of Cape Town on September 5 2019 to voice their anger over the violent murders of women and children in ...
News
2 years ago