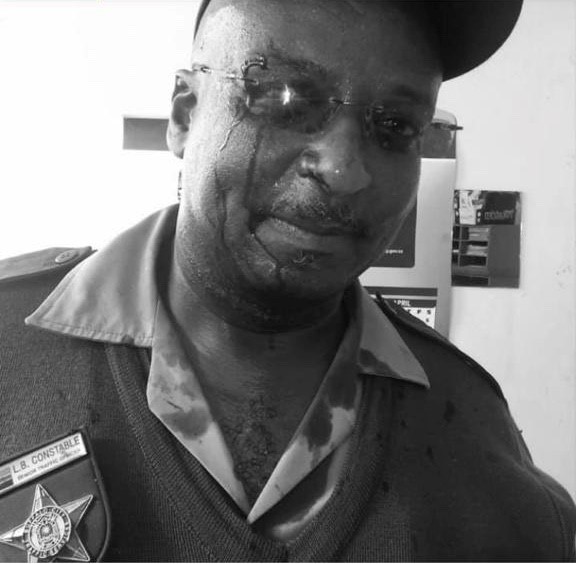 Traffic officer Lawrence Constable after being stabbed above the eye. Buffalo City municipality provided a black and white photograph as it was less graphic than a colour picture would be.
Image: Supplied

A traffic officer from East London can be confident of his moral aptitude after saving a woman from her attacker, and subsequently her attacker from mob justice.

Traffic officer Lawrence Constable was driving on Fitchett road, East London, on Sunday when he saw the woman being robbed and went to her aid.

Having caught up with the fleeing suspect, the officer tried to arrest him but was stabbed above his right eye.

Community members and motorists jumped in to help, and began assaulting the suspect and hurling rocks at him. Fortunately for the robber, the injured officer came to his rescue, firing warning shots to disperse the crowd.

"The Buffalo City Metro has applauded one of its traffic officers who went beyond the call of duty," said municipal spokesperson Samkelo Ngwenya. "Officer Constable, who has been serving the municipality for 25 years, caught up with the culprit who fought back, hurting officer Constable by stabbing him with a knife.

"When community members arrived, they started assaulting the suspect and officer Constable again had to intervene," she said.

Ngwneya said the officer was recovering and said he was "just doing his job".

A man claiming to be a Taxify driver who was stopped and found without an operating permit took a traffic officer who had stopped him on a wild ...
News
2 years ago

A vehicle explosion on Steenberg Road in Tokai, Cape Town, has left the driver in a critical condition.
News
2 years ago

The Middelburg magistrate’s court has set strict conditions for eight Lekwa local municipality licensing officials who are implicated in a ...
News
2 years ago