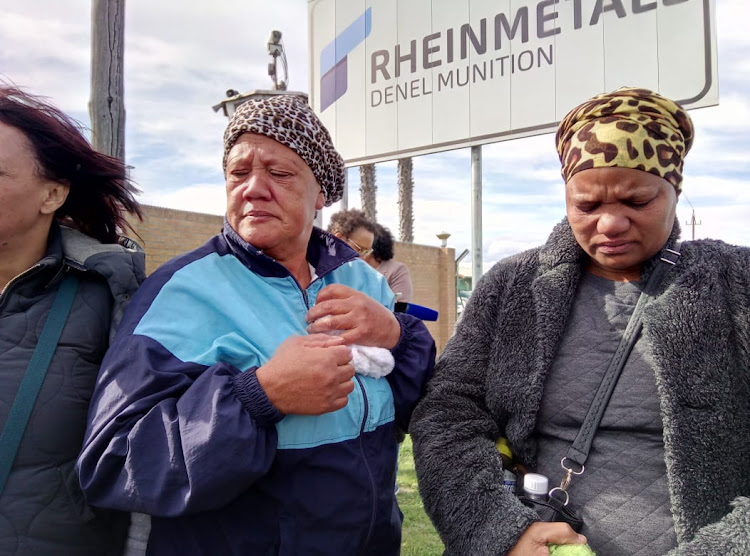 An explosion that killed eight munitions factory workers in the Western Cape last year was caused by a combination of human error and never-before-seen static electricity, say investigators.

The human error at Rheinmetall Denel Munition (RDM), in Macassar near Somerset West, happened when extra graphite was added to a propellant mixture.

Then something happened that had never been encountered in a munitions factory worldwide, said RDM investigation leader Rod Keyser.

“Based on extensive testing, assessments and elimination of other initially suspected causes, the most likely cause of the explosion was a build-up of electrostatic electricity in a suspended graphite cloud due to the triboelectric effect, and a subsequent discharge which ignited airborne propellant in the blending drum.”

According to Wikipedia, the triboelectric effect is unpredictable. “(It) is a type of contact electrification on which certain materials become electrically charged after they are separated from a different material with which they were in contact,” it says.

Residents living near a munitions factory in Somerset West near Cape Town where an explosion killed eight workers were advised that ammunition ...
News
3 years ago

The blast on September 3 2018 destroyed one of 400 buildings at the RDM plant, which manufactures artillery ammunition.

In a statement on Thursday, RDM said the N16 building in which they died was used for blending large volumes of propellant from smaller sub-lots. It had been in use since the 1980s.

“At the time of the incident, sub-lots of single-base propellant were being blended into a homogeneous final lot,” said the statement.

“All members of the team were fully trained and the team leader and supervisor both had extensive experience with the material and operations under way at the time of the incident.

“The investigation established that during mandatory routine testing of sub-lots in the course of the manufacturing process it was found one sub-lot did not meet the required quality standards.

Tears and anger at memorial for Denel blast victims

Mothers‚ fathers‚ brothers‚ sisters and children wept as the names of eight workers who perished in a massive munitions factory explosion were read ...
News
3 years ago

“Due process was not followed and, instead, an attempt to rework the material was made by adding extra graphite to the propellant.

“This particular type of electrostatic electricity risk was, as far as the investigation team has been able to determine, a previously unidentified and unforeseen hazard across the industry internationally.”

RDM CEO Jan-Patrick Helmsen said the investigation’s findings would be shared across the industry internationally. The company would also implement an intensive programme of refresher training for employees addressing specific procedures and safety.

“RDM has, since the incident, undergone an inspection process of its facilities with the input of relevant regulators, which included an assessment of safety systems in place. The facilities have been determined as safe and operations have been authorised to recommence,” said Helmsen.

Observers from 53 countries watched as the army fired hundreds of rounds of "proudly South African" bullets during a spectacular demonstration of ...
News
2 years ago

A Saudi Arabian-led coalition has bombed and blockaded Yemen into famine.
Opinion & Analysis
3 years ago

Denel should compensate the families of the employees who were killed in an explosion at the Rheinmetall Denel munitions factory on the outskirts of ...
Politics
3 years ago