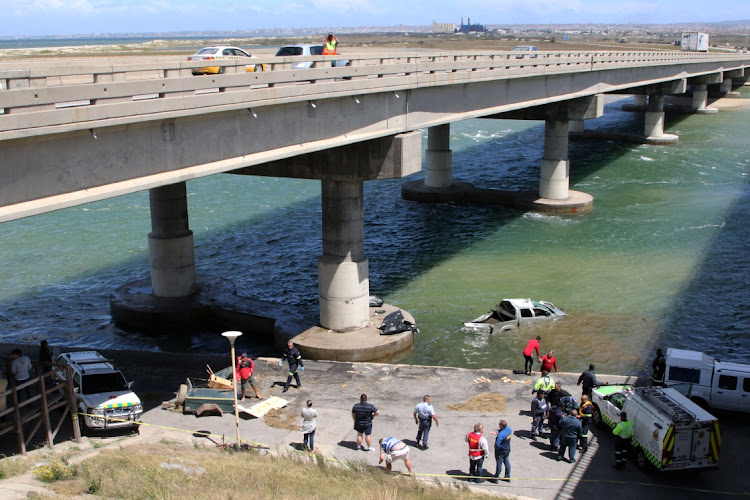 The three people who died in an accident along the N2 on Monday have been identified as British nationals
Image: Fredlin Adriaan

What was meant to be an adventure and working holiday for two British couples turned into a tragedy when three of them were killed and one was critically injured after their vehicle plunged off the Swartkops Bridge on Monday afternoon.

Several bystanders rushed to their aid in an attempt to pull them from the submerged wreck after the dramatic accident in which their vehicle was involved in a collision with a bakkie, HeraldLIVE reports.

The four, two married couples, have since been identified as British nationals — two of them senior managers of an international Christian charity and environmental organisation, A Rocha International.

The two couples were travelling to the Port Elizabeth airport from  Kuzuko Lodge in Addo when the fatal accident happened.

The deceased have been identified as Susanna Naylor, 54, and her husband Christopher Naylor, 58, as well as their friend, Miranda Harris, 66.

According to officials, both survivors are still in a critical condition in St George’s Hospital.

In a short statement, Kuzuko Lodge - which is managed by the Legacy Hotels and Resorts - group marketing manager Robert Hodson expressed condolences to the families involved.

A body believed to be that of missing Herolds Bay mom Heidi Scheepers has been recovered from the ocean by police divers.
News
1 year ago

Three people injured in an explosion at a Ballito restaurant

Three people were injured in an explosion at a KwaZulu-Natal restaurant on Sunday, paramedics said.
News
1 year ago