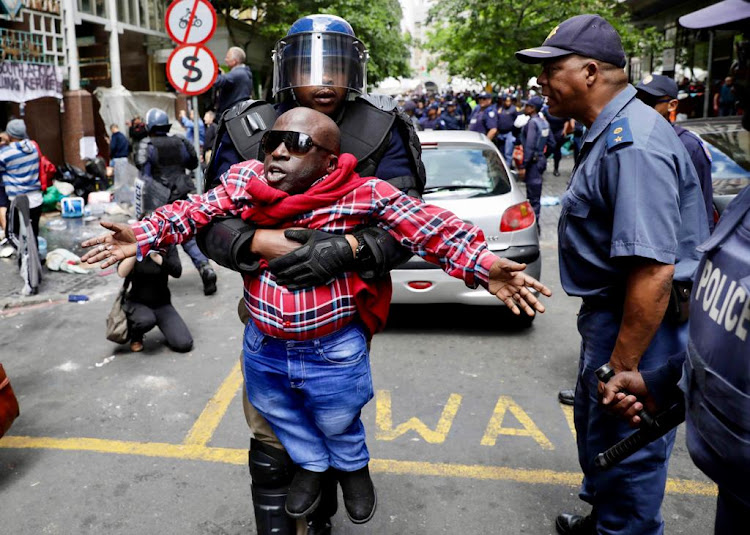 Papy Sukami was hauled away from the Waldorf Arcade in Cape Town as police used stun grenades and water cannons to disperse the crowd.
Image: Sunday Times/Esa Alexander

As hundreds of refugees signal their intention to leave the Cape Town CBD to seek a safer home abroad, police are investigating claims implicating one of their leaders in an alleged assault and robbery during the nearly two-month sit-in.

Two Congolese journalists who were covering the sit-in in October alleged that the leader, Papy Sukami, tried to intimidate, assault and rob them.

The accusation was made before a fracas erupted at the Central Methodist Mission on Greenmarket Square, where the refugees are now staying, in which a delegation from the South African Human Rights Commission (SAHRC) and UN attempted to address the group's leaders.

Foreign nationals who have taken refuge at the Central Methodist Mission church, Cape Town have this morning attacked faith leaders who were ...
News
2 years ago

Serge Shaumba and Jurol Loemba, who work as freelancers with their own production team, alleged that Sukami and a "gang" assaulted them and stole expensive camera equipment.

Police confirmed that a case of robbery had been opened, adding that the investigation was looking into claims of assault contained in Shaumba's statement.

"Please be advised that a case of robbery was opened for investigation, with no arrests so far. No warrant of arrest was issued yet," said SAPS spokesperson Sgt Noloyiso Rwexana.

The incident happened on October 16, a week after the group began sleeping at the Waldorf Arcade, where the UN's High Commission for Refugees (UNHCR) office is situated. The group spent the rest of the month there before police - armed with a sheriff's order, water cannon and stun grenades - arrived to evict the refugees, who are from all over Africa.

Loemba claimed that an instruction was given for the two journalists to be harmed.

"Serge Shaumba was beaten to the point that he had to go to the hospital for treatment after some refugees helped us to escape before something worse happened," he said.

Loemba told TimesLIVE that his colleague had experienced "pain in the head area as well as hand" and went to hospital "to be treated and check if he had any fracture or internal bleeding."

"I personally was beaten on the back of the head and brutalised several times as I tried to avoid them. It wasn't easy as we were surrounded in the crowd," he added.

Loemba alleges that the men stole his camera equipment worth R60,000. 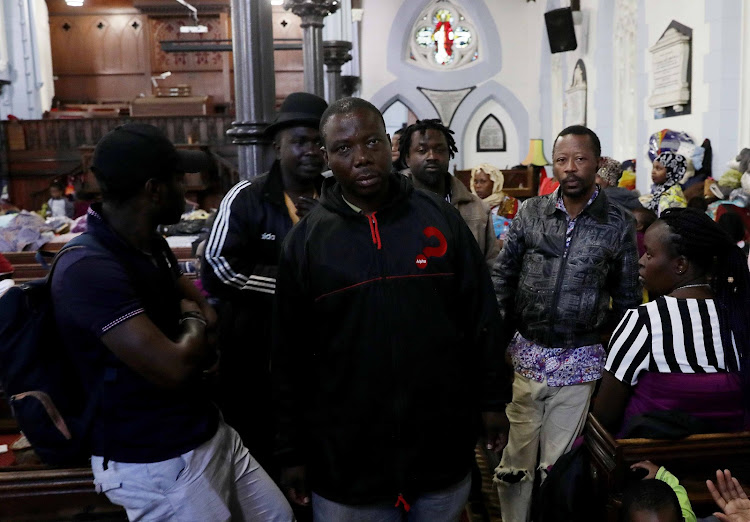 TimesLIVE visited the Central Methodist Mission to find Sukami, but he was not available to comment.

"No such thing happened," he said. "A lot of these people are spreading lies about us, to say that we are doing this for other reasons. We just want to be given safe passage to somewhere else.

"We have never threatened anyone. It is us who are threatened."

Sukami later denied the claims during an interview with TimesLIVE. He said the allegations amounted to a personal attack.

"That man Shaumba is trying to ruin my life," he alleged.

Sukami said Shaumba had shared pictures of him on social media, accompanied by disparaging claims, without his consent. He said taking the camera was an attempt to delete the footage when Shaumba refused to do so.

He claimed he "gave the camera back but [Shaumba] did not want to take it".

Meanwhile, Balous said that the number of refugees in the church was dwindling, with noticeably fewer people sleeping between the pews.

"Some have gone back to where they live," he said. "I am only here to help those who want to be helped."

This week, the disgruntled leader said that the group would be prepared by the end of the week to "walk thousands of kilometres in convoy" to a nearby country "like Botswana or Namibia" to escape alleged xenophobia in SA.

There are growing concerns among those helping the refugees living in the Central Methodist Mission (CMM) on Greenmarket Square in the centre of Cape ...
News
2 years ago

A total of 183 refugees are to appear in court on Monday on charges of trespassing following Friday's clashes with police outside the UN High ...
News
2 years ago

The South African Human Rights Commission has slammed the “violent” attack on religious leaders at the Central Methodist Church in Cape Town.
News
2 years ago