RDP housing is at a snail's pace in Eastern Cape 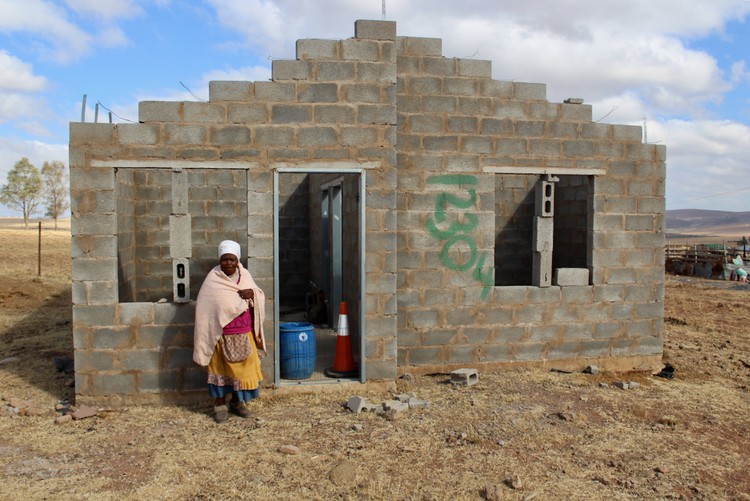 More than 100 houses out of 500 in a 2015 contract in Tsomo, Eastern Cape, are still at foundation level, 31 are partly constructed and 238 have not been started.
Image: Yamkela Ntshongwana / GroundUp

Four companies contracted in 2015 were meant to deliver 2,500 RDP houses by 2017. To date, they have only completed 718, and of those, many have not yet been handed over.

In 2015, Ingqayi/Mvelaphanda Construction company was awarded a tender of R74m to build 500 houses in Tsomo, Eastern Cape.

But GroundUp reported that, to date, only 120 of the 500 houses have been completed. A further 111 houses are still at foundation level, 31 are partly constructed and 238 were never started.

Eastern Cape MEC for human settlements Nonkqubela Pieters’ spokesperson Masiza Mazizi, said Ingqayi had left the site without giving a reason. He said the department had no option but to terminate the contract. The company had been paid just over R20m so far.

The completed houses however have snags and cannot be handed over to beneficiaries until they are signed off by officials. This has caused anger as completed houses stand empty. Some residents have now tried to occupy the houses.

Ten people implicated in a dubious multi-million rand toilet tender in the Eastern Cape were arrested in a dramatic pre-dawn swoop across four ...
News
2 years ago

Nonkonzo Siphika occupied one of these RDP houses for six months after her home was destroyed in a storm. She says her house is only short of ceiling boards and some tiling.

But Ward 10 Councillor Mwezi Bhikitsha (ANC) ordered the occupiers out.

Ingqayi/Mvelaphanda Construction owner Mfundo Nelani said he knew the contract had been terminated. He acknowledged receiving GroundUp’s questions, but he failed to reply.

MEC Pieters told GroundUp her office was looking into all the construction companies who are failing to deliver or had abandoned sites. She said more contracts would be terminated.

Pieters was speaking at a handover ceremony by the Intsika Yethu Local Municipality of a single house to Vuyelwa Bunzi, a destitute widow with three children.

Bunzi was given a furnished four-roomed house by contractor Lima Rural Development.

Mazizi said budget constraints at the department forced the contract to be extended to March 31 2021. At the end of September 2019, only 338 houses had been completed, 10 were still at foundation level, and two still under construction.

At the one-house handover ceremony in Rwantsana village, Myolisi Toni, ​​​ANC chief whip in the Intsika Yethu local municipality council, said the slowest pace of construction was in wards 8 and 10, where Ingqayi-Mvelaphanda had abandoned the site, and also in wards 1, 2, and 4 where the contract went to Vuikani and Kentha construction companies.

Toni said he hoped the visit by MEC Pieters would change how the construction companies were delivering.

Villagers in Rwantsana said they had been on the housing list since 2007. Nosecondary Magqase, who lives with her six grandchildren, said when her husband died she was told she needed to register for a house all over again.

In October, GroundUp reported how Gauteng-based company Vuikani Construction was awarded an R82m tender to build 489 houses but had only managed to build 95 in four years.

Maggie Nthatisi of Kentha said the company could only do as much work as the municipality budgeted for each financial year. “Unfortunately, this does not work well for the beneficiaries, who are waiting for their houses, nor does it work for our business,” she said.

Nthatisi said the project is in scattered villages with different ward councillors, which makes logistical requirements difficult to manage.

“Even in difficult times we have never abandoned the site. Instead, Kentha Construction has always done more than expected and is still committed to finish the project and leave every beneficiary with his or her house,” she said.

WATCH | 'Give back my house': Alex man survives axe attack after mob eviction

Gibson Ncube has been the victim of unlawful evictions since December 2018. The latest attack took place on Friday September 20 at his home in ...
News
2 years ago

With a social housing backlog of 300,000 units in Johannesburg, the city is proposing new ways to facilitate quicker delivery of state-sponsored ...
News
2 years ago