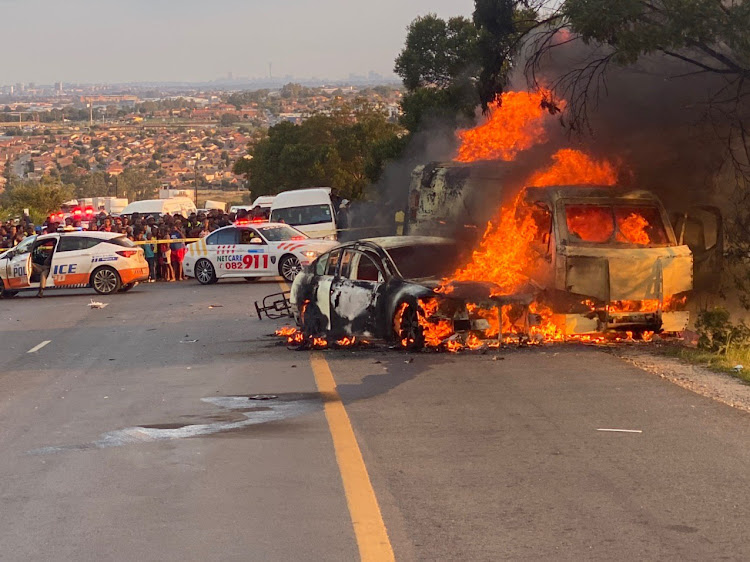 A gang ambushed the cash van and ordered the crew and driver to lie on the ground.
Image: Netcare911

Two vehicles, including the cash-in-transit van, were set alight after a brazen heist in Malibongwe Drive near Cosmo City on Monday evening, police said.

Police spokesperson Col Brenda Muridili said a gang ambushed the cash van and ordered the crew and driver to lie on the ground.

Muridili said the group loaded an undisclosed amount of money into two cars and fled the scene.

The cash van and a vehicle were set alight on the scene.

The incident happened at about 6pm on Monday.

Netcare 911 spokesperson Shawn Herbst said two guards were treated on the scene and transported to hospital in a stable condition.

Malibongwe drive has been closed due to cash in transit.#CashinTransit pic.twitter.com/VYhUvLrL71

Please check on your families, friends and colleagues who travel via Malibongwe Drive between Cosmo City & Lanseria Airport

Cash-in-transit company SBV Services is offering a reward of up to R1m for information leading to the arrest and prosecution of a gang that bombed an ...
News
2 years ago

Police have launched a manhunt for an armed gang which allegedly shot at and bombed a cash-in-transit vehicle outside Richards Bay, KwaZulu-Natal, on ...
News
2 years ago

National police say valuable evidence was lost when community members looted a cash van after a heist in Katlehong, east of Johannesburg
News
2 years ago