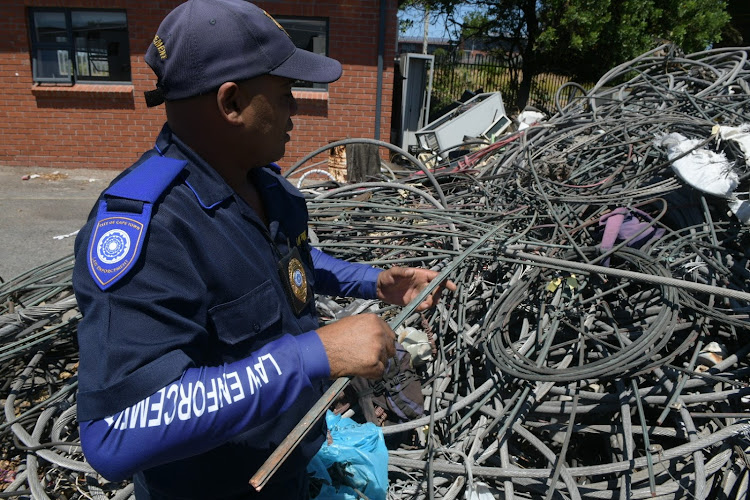 A member of Cape Town's rail enforcement unit with some of the 2,225m of stolen cable recovered in its first year.
Image: City of Cape Town

The partners behind the 100-strong team — the city of Cape Town, the Western Cape government and the Passenger Rail Agency of SA (Prasa) — said on Thursday that 55 people were charged under the Criminal Matters Amendment Act for damaging essential infrastructure.

The unit impounded more than 2km of stolen copper cable and 865kg of stolen metal and carried out 2,471 inspections at theft hot spots and scrapyards.

The agreement to co-fund the unit expires at the end of June and the city and provincial governments said they wanted to extend it for at least a year.

Metrorail’s manager in the Western Cape, Richard Walker, has been put on paid leave amid “multiple challenges and lapses”, the Passenger Rail Agency ...
News
2 years ago

“The harsh reality is that it will take time and more resources to deal with those who are vandalising and destroying our rail network while we are working hard to stabilise the service,” said Felicity Purchase, Cape Town’s mayoral committee member for transport.

Bonginkosi Madkizela, the transport MEC, admitted that the unit had failed to make a dent in the rash of arson attacks that have crippled Cape Town’s rail network.

“We need to revisit the modus operandi of this unit so that it can be more effective in dealing with arson,” he said.

Raymond Maseko, appointed this week as acting head of Prasa in the Western Cape, said: “The members of the unit are valuable force multipliers to Prasa’s protection services and the rapid rail police unit in the fight against crime and metal theft.

“Commuter safety on trains and stations and eradicating the debilitating impact of metal theft on service industries must remain key priorities.”

As transport minister Fikile Mbalula called for train arsonists to get harsh sentences a transport union decried unsafe working conditions on and ...
News
2 years ago

Cape Town's depleted fleet of trains went from 33 to 32 on Saturday when six carriages and a motor coach went up in flames.
News
2 years ago

"Prasa is broken. We will fix it," the commuter rail agency's administrator said in Cape Town on Thursday.
News
2 years ago