'We have lost five months of business,' says trader 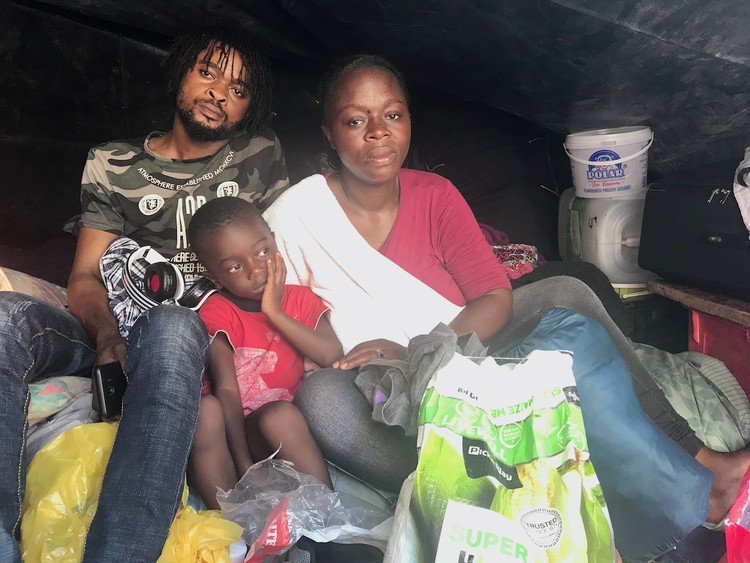 'Leaders explained to us that we are not allowed to cook and wash outside, but I am a human being. I still need to eat and wash,' said Suzanne Kabasele, pictured above with her son and brother in-law Melchi Kazadi.
Image: GroundUp/Tariro Washinyira

“We make money in summer and have lost five months of business. We are not against these people, [but] they are taking bread from our mouths. The city council still expects us to pay rent,” an irate trader on Greenmarket Square, Cape Town, told GroundUp.

On Monday, Judge Daniel Thulare granted an interim order that prohibits the refugees who are staying inside and outside the Central Methodist Mission (which is on Greenmarket Square) from making fires and cooking, urinating and defecating or washing clothes outside.

The interdict will come into effect in the next seven days after the city has provided a venue for a process of documentation verification. The refugees have been protesting in the city centre since October, demanding to be resettled in other countries because they say they are not safe in South Africa.

“For us there was no judgment, nothing was done,” said the trader.

The Tudor Hotel, which is next to the church, is closed. The management and owners of restaurants and hotels in the area are angry. Most, however, refused to speak about the situation.

But Simba Kaparepare, a trader, was blunt. “These people should go back where they came from. They can afford to pay rent. I see them buying cool drinks and fast foods, but I can’t even buy myself a bottle of water. My family and my parents in Zimbabwe are dependent on this business. They defecate and urinate everywhere. Customers are scared of them.”

Lillian Kukangwa from the DRC was furious. “They must remove them … not tell them don’t bathe, don’t cook.”

Reverend Alan Storey of the Methodist Mission said in a statement on Wednesday: “My hope is that this judgment will draw all those involved in this protest closer to the truth of their own situation and move them to vacate the area and the church as soon as possible. Furthermore, I hope that everyone, including those inside the church, will use the opportunity afforded to them by the judgment to seek assistance should they need.”

Suzane Kabasele, a refugee from DRC, was dressing her child in a makeshift shelter. She was surrounded by utensils – a pan of braaied fish, a bag of maize meal and coal. She said she is waiting for the UN High Commissioner for Refugees (UNHCR) to begin a resettlement exercise.

“I stayed in more than three townships but there was no peace. My neighbours wanted to kill me. On the train they threatened to kill me. They wanted to kill me for the small job I was doing of selling airtime and SIM cards. Leaders explained to us that we are not allowed to cook and wash outside but I am a human being. I still need to eat and wash. I will cook unless the city will provide food,” said Kabasele.

Melchi Kazadi, from the DRC, said his fisheries business was looted and destroyed on September 3 in xenophobic violence in Alexandra, Johannesburg. “Our protest is against UNHCR but they never come to us to listen to our grievances. We depend on UNHCR. They must come and execute their mandate.”

Spokesperson for the UNHCR, Heinn Shin, told GoundUp that the organisation has been engaged in a series of regular meetings with the government, NGOs, as well as the protesters, since the sit-in started in October.

“UNHCR is not in a position to resettle or relocate protesters to a third country. Neither group nor individual interviews with the protesters at the Central Methodist Church will be conducted, as resettlement is an option for a very small percentage of displaced persons globally.

“In order to protect the integrity of the process, there will be no priority given to this group. All refugees and asylum-seekers have equal access to UNHCR services.

“Refugees and asylum-seekers in South Africa are protected by the country’s laws and policies, and UNHCR’s programme in South Africa focuses on advocacy and support to local integration. UNHCR remains concerned about the misinformation being circulated by the self-claimed protest leaders.”

The judge also slammed the way the city had failed to deal with the situation. “Property prices plummeted. Businesses were affected. European travel advisories were issued warning tourists against visiting Cape Town. Hotel guests were scared off. Hotel managers were threatened,” he said.

Cape Town is getting ready to remove refugees from the streets and sidewalks around Greenmarket Square, in line with a court order
News
1 year ago

The SA Human Rights Commission is withdrawing its assistance to a group of refugees occupying the Central Methodist Mission on Greenmarket Square, ...
News
1 year ago

The City of Cape Town sent two minibuses to Greenmarket Square on Monday to return refugees to where they lived before settling at the Central ...
News
1 year ago