R10,000 reward for arrest of UKZN student who assaulted professor during protest 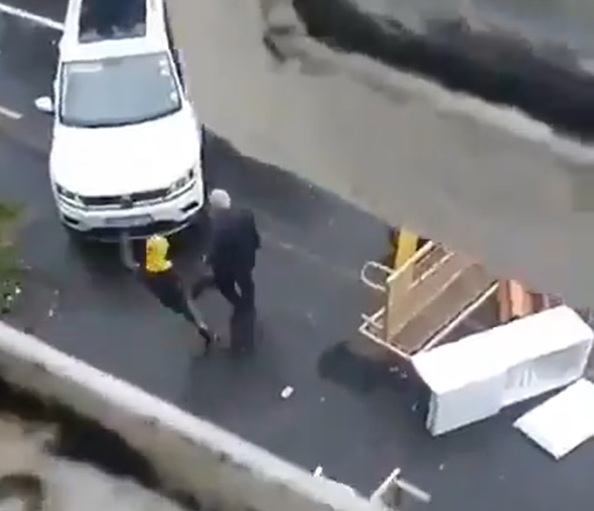 A screenshot from one of the clips shows a student kicking Professor Erwin Brüning, a German maths lecturer, during a protest at UKZN's Westville Campus on Wednesday.
Image: Screenshot

A political and social commentator has offered a reward of R10,000 for the arrest of a University of KwaZulu-Natal student who was caught on camera assaulting an emeritus professor during a protest on Wednesday.

Two separate videos of the incident, filmed discreetly from different angles in the P Block residence, show Professor Erwin Brüning, 77, a maths researcher and German national, being manhandled as he approaches one of the three blockades that had been set up by protesting students at the university's Westville campus.

In the first clip, Brüning can be seen approaching one of the blockades, in which students had laid steel bed frames, fridges, and tables across the road.

He attempts to remove a piece of steel sheeting, presumably to clear a path for his vehicle to get through, when he is approached by a student wearing a yellow T-shirt around his head and face to conceal his identity.

The two exchange words before the student pulls Brüning by his blazer and pushes him towards his vehicle a few metres away.

In the second clip the student is seen kicking Brüning from behind and shouting “Voetsak” as the elderly professor proceeds to his vehicle.

“Yesterday, an emeritus professor was assaulted on the Westville campus. He sustained a slight injury to his hand. We are working closely with SAPS to identify the suspects involved. Management has been in contact with the professor and is providing him with support as well as counselling,” the university said in a statement.

The emergence of the footage on social media has sparked outrage, prompting former alumnus Kiru Naidoo, to offer a R10,000 reward for information that may lead to the arrest of the student.

Please help me find this lad. Let me have his parents' details too so that I can visit to share how he has dishonoured them. The assaulted man has already stood up more courageously than the lad ever will. I am putting up R10000 to help @UKZN find & discipline the perpetrator. pic.twitter.com/2tcX5NMWtb

Naidoo said he was outraged about the incident and said someone needed to speak out against such acts or society would descend into lawlessness.

“The university is a sacred space. The professoriate must be respected and defended, not bullied and beaten. The young man's conduct is disgraceful and if I have anything to do with it he will face the consequences. The offer of a reward to identify the perpetrator has brought a torrent of leads which I have passed on to law enforcement.”

Naidoo said the violent behaviour undermined the merit the student protest might have.

“The university really needs to show leadership in resolving this impasse and reach out to parents and the stakeholder community,” he told TimesLIVE.

Times Select reported that the violence centred on the issue of historic debt of returning students.

'We will intensify the struggle,' vows UKZN student representative council

The university has suspended lectures 'until further notice', but registration is continuing
News
2 years ago