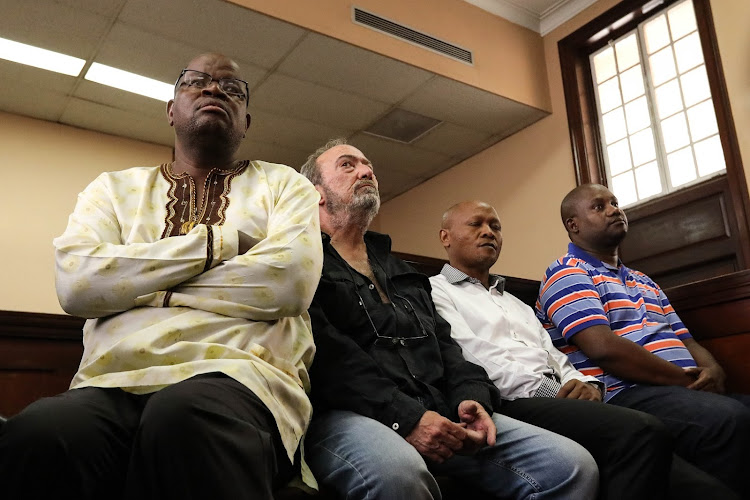 Mangope France Hlakudi at the Johannesburg magistrate's court during a bail application on December 19 2019, where he faced charges with three others in a R745m fraud case. Hlakudi appeared in court again on Wednesday in a separate R30m fraud case, the Hawks said on Thursday.
Image: Alaister Russell/The Sunday Times

This followed a joint investigation by the serious commercial crime unit and the revenue service Sars, said Mulaudzi.

“Hlakudi has been charged for contravening the Tax Administration Act for allegedly not declaring his income during the period 2016-2018, with Sars losing approximately R30m. He is charged, firstly, in his personal capacity and, secondly, as a director of three entities.

“Hlakudi is out on a warning and the case has been postponed to May 27 2020,” said Mulaudzi.

This court appearance will come two days after he is set to appear in court, this time in a R745m fraud and corruption case linked to the Kusile power plant.

Hlakudi and another former Eskom senior executive, Abram Masango, appeared alongside Tubular Construction CEO Tony Trindade and Mike Lomas, the company’s former chair. They face allegations that kickbacks were paid linked to the illegal awarding of contracts in the building of Kusile.

A secretary at a law firm in Stellenbosch who allegedly siphoned R12m from trust funds has appeared in court with her husband and daughter on fraud ...
News
2 years ago

Soweto pastor 'scammed congregants out of more than R2m'

A pastor from Soweto will face fraud charges after allegedly fleecing members of his congregation of around R2m, Gauteng police said on Wednesday.
News
2 years ago

Five SA Social Security Agency (Sassa) employees in KwaZulu-Natal have been nabbed for alleged fraud by the Hawks.
News
2 years ago