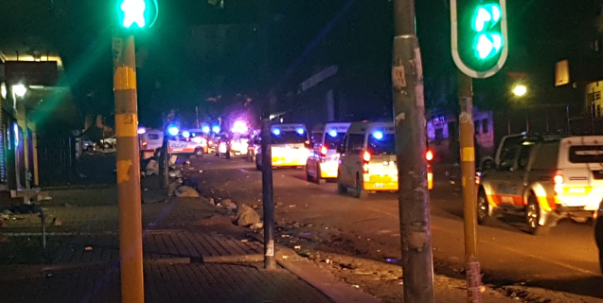 Scores of law enforcement officers began their patrols of the streets of Johannesburg when the 21-day coronavirus lockdown officially started.
Image: Alex Patrick

On Friday, South Africans woke up to day one of what will be the norm for the next 21 days as the country is in lockdown.

The nationwide lockdown is one of the measures announced by President Cyril Ramaphosa to halt the spread of the coronavirus.

As confirmed cases ticked above 1,000 with two deaths announced on Friday morning, the sweeping measures are in a bid to stem the pandemic and “save lives of South Africans from infections and to save lives of hundreds of thousands of people”.

People will still be able to leave their homes for essential reasons such as to seek medical care, buy food or collect a social grant.

All shops and businesses will be closed, with the exemption of pharmacies, laboratories, banks, the JSE, supermarkets, petrol stations and health care providers.

Health workers, emergency personnel and security services will continue to work, while soldiers have been deployed to patrol the streets in support of the police.

At midnight on Thursday, several people were arrested in Johannesburg for allegedly disregarding lockdown rules.

TimesLIVE reported that among those arrested were a club owner who continued to operate after midnight despite calls from police minister Bheki Cele for taverns, clubs, pubs and other liquor outlets to remain closed.

Arrests minutes into lockdown as rules are flouted in Joburg

It was not a seamless entry into the official 21-day lockdown period sparked by the coronavirus  in Johannesburg as scores of chancers came face-to ...
News
2 years ago

On Twitter, hashtags #21LockdownSA and #Day1 topped the trending list as many shared how they were feeling.

While some said they were disappointed by the no “dramatic entry by the police or soldiers”, many were not fazed by the lockdown.

Here is a snapshot of what tweeps had to say.

Mandela served 27Years in prison , wena uhluwa e’21Days in the comfort of your own home. Hai maaan! Leskari tena #21daysLockdownSA

It’s day 1 of the #21daysLockdownSA and am giving tips on #survivingtheLockdown
Number 1: wake up at the same time you do on a normal day and prepare yourself as if you are going to work. This is my first day of working from home. pic.twitter.com/xQrr6hSb6z

My neighbourhood is so quiet this morning i can hear even a pin drop. Not a single car and not a single person in site and my street is normally not so quiet #21daysLockdownSA #Day1 pic.twitter.com/tlbsevt5iH

Wow kanti all this time this place had birds! I just couldn’t hear them from all the noise of cars and people rushing to work🙏🏾#21daysLockdownSA pic.twitter.com/0Qsb8mJ5A4

#21daysLockdownSA I was really waiting for a dramatic entry by the police or souljas, I literally stayed up till midnight pic.twitter.com/whynZxP7PG

#Day1 and its business as usual ko Alex Pan pic.twitter.com/diC0dsfcW5

This is Twist Street, the route taxis take from Noord MTN taxi rank going to all other surrounding areas.
It's normally buzzing with taxis & busses #Day1 #LockdownSA pic.twitter.com/HQYau57f0j

At the very moment this article was published, SA went into lockdown.
News
2 years ago

After the announcement that the sale of alcohol would be prohibited during the 21-day lockdown, South Africans queued outside bottle stores to stock ...
News
2 years ago