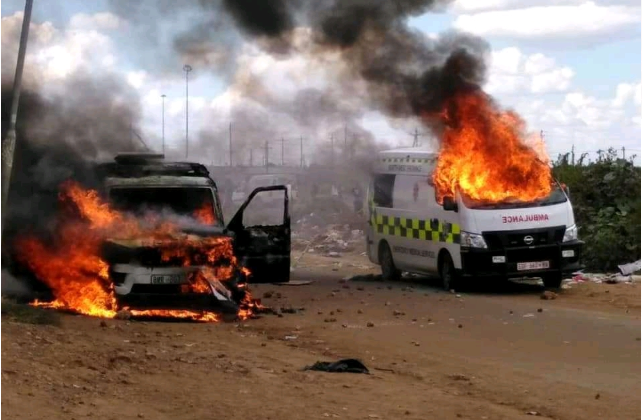 An ambulance and police vehicle were among three vehicles set alight by community members in Boikhutso on Tuesday.
Image: Supplied

Enraged residents of Boikhutso in the North West torched two police vehicles and an ambulance on Tuesday after the death of a young boy, who was allegedly hit by a police car.

According to police spokesperson Brig Sabata Mokgwabone, the eight-year-old boy allegedly ran into the road and was struck by the K9 Unit vehicle. He died on the scene.

“Subsequent to the incident, members of the community set alight the police vehicle. They also burnt another police vehicle which was used by first responders as well as an ambulance which was summoned to the scene.

“Furthermore, a local municipality traffic vehicle was pelted with stones while goods were looted from one of the local tuck-shops,” said Mokgwabone.

Three police officers and two paramedics were injured in the unrest. They were transported to hospital for further treatment.

Mokgwabone said the boy was one of two children to have died under such circumstances in the area. Another child, a girl, was hit by an Isuzu bakkie near Blydeville earlier in the day

North West police commissioner Lt-Gen Sello Kwena conveyed his condolences to the families of the two deceased children, but condemned the community taking the law into their own hands.

Video footage from the scene of the first incident was circulating on social media.

“We wish to convey our deepest condolences to the families that lost their children in the horrific incidents and call on the Independent Police Investigative Directorate (Ipid) to investigate the loss of life,” said Sanco's  provincial chairperson, Paul Sebegoe.

“We wish to condemn in the strongest terms possible the destruction of state vehicles that include an ambulance when such are in high demand to tackle the Covid-19 pandemic. There is no justification for the resultant lawlessness that undermined due process for those responsible to be held accountable,” he said.

He, however, expressed concern that young children were loitering in the street while the lockdown was still in force and called on parents to keep their children indoors or in their yards.

“Failure to adhere to the lockdown regulations will be too costly and have far reaching consequences for the economy if communities continue to ignore them,” said Sebegoe.

Six vehicles belonging to the KwaZulu-Natal social development department were torched in strife-torn Ladysmith on Wednesday.
News
1 year ago

Residents of Jozini in northern KwaZulu-Natal torched a police vehicle on Monday evening, reiterating their calls for intervention into allegations ...
News
1 year ago