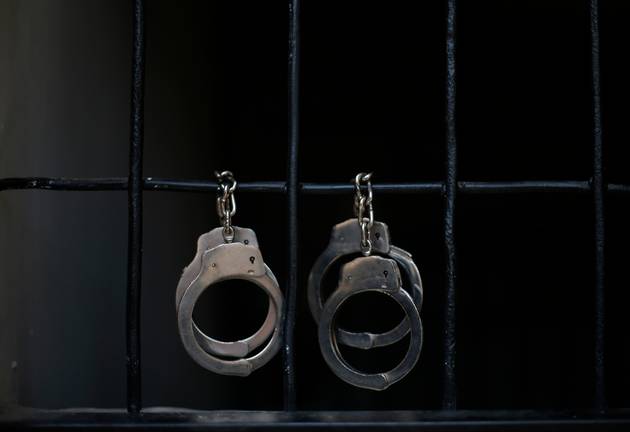 A 25 year-old man who allegedly raped a young woman in the presence of her sister during an armed robbery was arrested by police on Thursday.
Image: SUHAIB SALEM

A 25-year-old man who last month allegedly raped a young woman in the presence of her sister during an armed robbery in Kagiso, west of Johannesburg, has been arrested.

Police spokesperson  Capt Solomon Sibiya said the incident occurred at the pair's home in Leratong while they were sleeping.

Sibaya said that about 9pm, the victim was asleep with her sister in their home. She was woken by her sister who alerted her to a person standing inside their bedroom, behind the door.

"The suspect was armed with a firearm and warned the siblings not to scream," said Sibiya.

The armed man took a cellphone and an undisclosed amount of money.

"The suspect then ordered the victim out of bed, and her sister to cover herself with a blanket, as he raped the victim and later fled," said Sibiya.

A manhunt was launched for the suspect and a few weeks later police received more information which linked the man to the crime. He was arrested on Thursday evening.

The 25-year-old is due to appear in the Kagiso magistrate's court on Monday.

Acting station commander Col Peter Mabuso applauded the arrest, saying it would be an example for perpetrators of similar crimes.

"Working together with our communities will go a long way to making a difference and ensuring stability and safety in our areas," said Mabuso.

A 32-year-old man was arrested for allegedly assaulting his girlfriend and raping her 74-year-old grandmother at their Northern Cape home, police ...
News
2 years ago

A rape suspect who co-operated fully with the police was rewarded by being locked up for 19 days, and four years later he has been awarded R350,000 ...
News
2 years ago

The list of GBV victims cannot grow any longer: Lamola

SA’s criminal justice system must be reorientated to allow victims of crime to see themselves at the centre, women to have faith in it and for ...
Politics
2 years ago